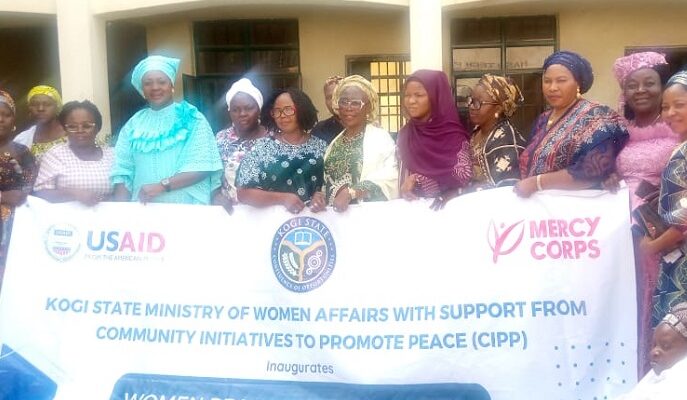 The Kogi State Government in collaboration with the Mercy Corps, Nigeria, has inaugurated 15-Member Women Peace Building Council in each of the five local government areas in Kogi Central Senatorial district.

The project is funded by the United States Agency International Development  (USAID), implemented by Mercy Corps under the Community Initiatives to Promote Peace (CIPP), aimed at preventing violent conflict in the most at-risk communities.

In his remarks on Wednesday in Okene, the Kogi State Commissioner for Women Affairs, Hajia Fatima Buba, said the inauguration was a step towards increasing women leadership and active participation in conflict resolution and management.

Buba noted that the event also coincided with the 16 days ”Activism against Gender Based Violence (GBV)”, an annual event undertaken from Nov. 25 to Dec. 10, to campaign against GBV and stop every form of violence against women and girls.

According to her, the theme for 2022 commemoration is ”Unite! Activism to End Violence Against Women and Girls”.

”Election and electoral processes globally are violence ridden, Nigeria and Kogi State are not exempted.

”In view of the 2023 general elections, structures and strategies are put in place at all levels to ensure peaceful elections, and reduced post election conflicts to the barest minimum.

She stressed that the time has come to mobilise youths and women at all levels in order to discourage violence and embrace peace in the communities towards achieving peaceful election.

Buba, who was represented by the Permanent Secretary of the Ministry, Mrs Modupe Andi, thanked the Mercy Corps-CIPP for the partnership, while appreciating Gov. Yahaya Bello for ensuring peace and security of the people of the state.

The commissioner stressed that the partnership in promoting peace in the state was noticeable, and hoped for more robust collaboration to enhance peace and development.

Also speaking, Mrs Eunice Abimbola Agbogun, the Representative of Mercy Corps-CIPP in Kogi, stressed that the roles of women in peace building in the society cannot be overemphasised.

Agbogun, who is the Executive Director, Challenge Parenthood Initiative (CPI), said CIPP’s objective is to improve local capacity and skills among the conflicting communities to manage disputes.

She added that it would also srengthen and build more sustainable Early Warning Early Response (EWER) mechanisms, and deepen engagement of women in peacebuilding and preventing violent extrimism, among others.

Agbogun noted that the CIPP worked in 16 communities and in four local government areas in each of the six implementing States since 2019 general elections.

”As women, we must brace up and do what we should to to ensure a better and peaceful society,” she advised.

On his part, Mrs Motunrayo Babatunde, the Director Women Affairs in the Ministry, said the council’s objectives was to prevent violence and promote peaceful coexistence in the society.

Babaunde added that the council would also address the root causes of conflicts and violence, increase women participation in leadership, and integrate women leadership in the state, local government and ward levels.

She said the operational guidelines would be to carry out awareness creation to ensure peace during the 2023 general elections, educate youths and the  public not to engage in any form of violence.

The Vice Chairman, Okene Local Government Area, Mrs Bilikisu Aliyu, who spoke on behalf the Council members, thanked the commissioner for her efforts in making the inauguration possible, and commended the governor for his leadership quality.

Aliyu said that women had made meaningful participation in peace building, strengthening, protecting and deepening the effectiveness of a better society.

She urged the members to represent their various local governments, wards communities well, by taking the leadership task seriously, and be very active in ensuring a hitch free and peaceful 2023 elections.

The highlight of the occasion was the official inauguration of the 15-member of the Peace Building Council by the Commissioner, from each of the five local government areas in Kogi Central.