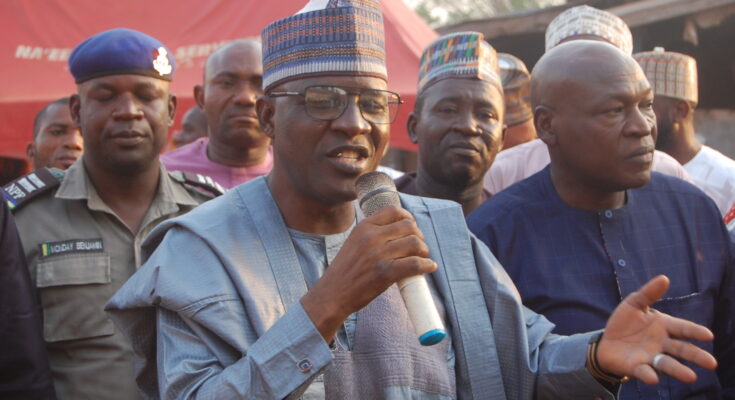 2023: Halims The Only Option, Equation

The road to 2023 is around the corner, with Ankpa federal constituency representation keenly contested not out of zeal to bequeath a lasting legacy on the people of the constituency, but out sheer political occupation and representation.

It is not in doubt that the current federal lawmaker representing the area, Honourable Abdullahi Ibrahim Ali (Halims) is a ranking member of the House to the advantage of the people of the area, and no doubt believed strongly in rendering stewardship through performance, the bane of Nigeria democratic practice.

The dragnet of endorsements currently going across the federal constituency is not meant to attract both selfless and social services, but the fear of loosing jobs after 2023.

But unfortunately, Ankpa federal constituency reps seat, being a cumbersome area, is not even vacant, not only for the people from Ankpa local government, but by extension Omala and Olamaboro.

This template is being adopted through a gentleman agreement and a trend that was devoid of any awkward political arrangements, but for the mere fact that Omala and Ankpa had benefitted hugely in the political evolution of the federal constituency.

That Omala produced Kogi state Governor for nine years was enough sacrifices done from Ankpa, while Olamaboro clinging to senatorial seat for consecutive eight years was a great disservice to Ankpa people politically, with aborted attempt by Ankpa local government quest to produce a Senator, and lately out of sheer circumstances got towards the tail end of 8th Senate, a decision that was politically inexpedient.

Therefore, political class jostling to cajole the electorate with self centered analysis may not be on point at the end of the day.

This is also in addition to the prevailing situations were by Omala local government annexed federal house of representatives by producing Alhaji Mohammed Idris at the expense of Ankpa local government.

With these two scenarios, Omala and Olamaboro are already edged out of political equation for as long as Ankpa will be willing to produce federal lawmaker as compensation for many years of aberration.

Coming back to Ankpa local government politics. We are not unaware that Rt Honourable Muazu Abimaje, Linus Ogba had done their bits from Ankpa. Mabis with a ranking experience to the betterment of his people, a feat that never came their way after many years.

It is therefore politically required, that the current federal lawmaker armed with ranking advantage that had attracted more development than any of his predecessors is allowed to continue, to ensure more dividends of democracy.

As chairman House Committee on Steel Development, Rt Honourable Abdullahi Ibrahim Ali has opened a lot of opportunities to both federal, state and other jobs to the benefits of his constituents.

This was done without fear or favour to any of the sections, but geared towards the welfare of Ankpa federal constituency.

Since skill development, acquisition and capacity building is the current trend of the 21st century, it is obvious that more outlets were established by the current federal lawmaker to the glory of the people of Omala, Ankpa and Olamaboro federal constituency.

Trainings and retraining in modern agriculture, both in subsistence and commercial, that doubled efforts at producing stable crops and food stuffs across the three local government of the federal constituency.

This also included the school programs that had returned children of school age, hitherto dropped out, back to school to ensure the educational development of the areas.

Provision of social services like hospitals, boreholes and other essentials were provided to communities across the federal constituency, in addition to clamour to both state and federal government to open up more roads through construction and rehabilitation that will ensure movements of farmers and their farm products.

Rt Honourable Abdullahi Ibrahim Ali, during his stewardship and thank you tour, had promised to do more to the progress and development of Ankpa federal constituency.

Popularly nicknamed ‘Talk and Do’, Rt Honourable Abdullahi Ibrahim Ali is known to be a promise keeper at all times, as his yuletide thank you tour was laced with promises and fulfilment of promises to his constituents.

Ankpa federal constituency is lucky to have Rt Honourable Abdullahi Ibrahim Ali as a ranking member of the current national assembly, as efforts should be intensified to sustain the current trend by returning him in 2023 for the continuation and attraction of more dividends of democracy.

A stitch in time, they say, saves nine.