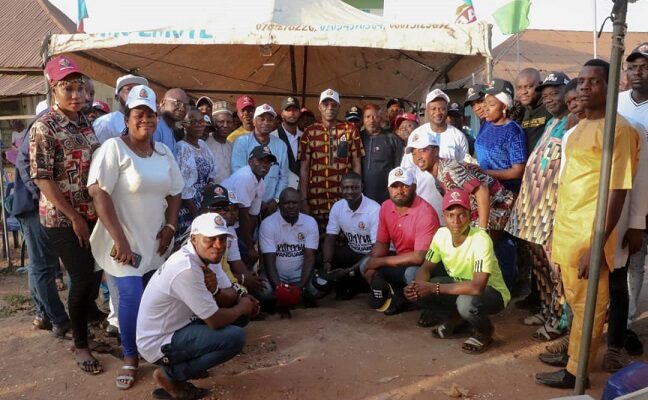 The candidate of the ruling All Progressive Congress for Kabba/Bunu/Ijumu Federal Constituency in the forthcoming general elections scheduled to hold on February 25, 2023 and the current Speaker of the Kogi State House of Assembly, Rt. Hon. Matthew Kolawole has promised the people of the Federal Constituency effective and efficient representation when elected to represent the area in the National Assembly in 2023.

According to him, he is impressed with the caliber of the young men and women who are members of the group while commending the ALGON Chairman, Hon. Taufiq Isah for his doggnesess in harnessing the youth to work for the overall success of the party.

He said with the support and cooperation of all, the APC will for the first time retrieve the seat of the Federal Constituency from the opposition stressing that the Youth group is a critical component of winning any election in the world, and assured them of great benefits ahead.

Earlier, the Executive Chairman of Ijumu Local Government Area who doubles as the ALGON Chairman on Kogi State, Hon. Taufiq Isah said no stone will be left unturned at ensuring total victory for all the APC candidates in the Ijumu, stressing that it is total from top to bottom.

He said all structures had been collapsed in Ijumu for the APC to have a smooth ride in the elections, urging electorates in the area to have faith in the party.

He said with Hon. James Abiodun Faleke as the PCC Secretary and a close ally of Asiwaju Bola Ahmed Tinubu, Ijumu will have a great deal when the party is returned come February next year.

He said the group is meant to create awareness and take campaigns door to door for the APC Federal House of Representatives candidate, Kabba/Bunu/ Ijumu federal constituency and other candidates from President to the House of Assembly.

He pointed out that Yomikola Youth Vanguard is a formidable support group for the actualization of the All Progressives Congress mandates across all constituencies and districts.