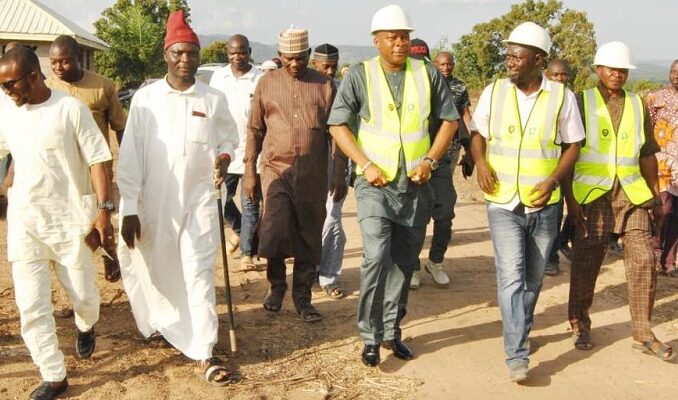 The executive chairman of Adavi local government council, Kogi state, Hon. Joseph Omuya Salami, has assured that the proposed trailer park and market in Zariagi will be the best in North Central region of Nigeria.

Salami gave the assurance while inspecting ongoing works on the site of the proposed trailer park in Zariagi on Wednesday.

The council chairman explained that the vision for a trailer park was conceived to avoid congestion on the Federal road that connects to over ten states, increase both local and state governments’ revenue, curb insecurity, create jobs and business opportunities for women and youths in the area.

He said Adavi local government is setting the pace in North Central Nigeria with the support of Governor Yahaya Bello.

He expressed satisfaction with ongoing work, the clearing and grading of the land.

“My administration is working tirelessly, with available resources within its reach, to complement the state government efforts in all ramifications. And as such, by the time this project is completed and commissioned, it is going to be one of the best trailer parks in North Central and the nation at large. It will create an avenue to reduce and relieve the challenges faced on the federal roads by trailers and trucks most of the time and protect our domain from all forms of crimes, and engage our women and youth who have passion for business, and those who are skilled.

“We have put everything into consideration before we decided to embark on this project, and I can tell you that by the time we are through with this project, it will be of immense benefit to the people living in my local government, Kogi state, and across the whole nation. As all you know Kogi State connects numerous states, therefore, this road is used by most Nigerians,” he said.

According to Adavi local government’s Supervisor for Works, Land and Housing, Hon. Yusuf Nasir Ekunu, the proposed site will be able to contain over 500 trailers and trucks, mechanic workshops, shops for spare parts, security posts, restaurants and other major businesses.