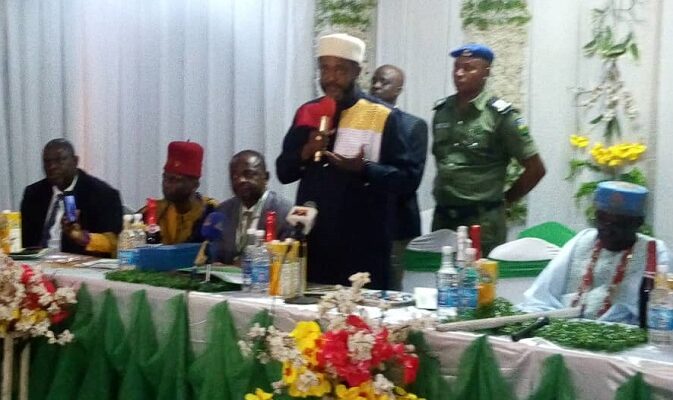 The President, World Medical Association (WMA), Dr. Osahon Enabulele on Friday, urged medical doctors to take up the challenge of leadership by participating actively in politics in advancing the medical profession.

Enabulele made the call at the 2022 Annual General Meeting (AGM) and Scientific Conference of the Nigerian Medical Association (NMA), Kogi State chapter in Lokoja, with the theme: ”Politics: Advancing The Medical Profession”.

Enabulele, the Keynote Speaker, who spoke on the event’s theme, said politics could advance medical profession through the Executive and Legislative positions, Public policy making, Political party membership, and other appointive positions.

He urged the medical doctors to think beyond the Consulting room, develop self confidence, take risk, strategise, as well as mass political education, and resource mobilisation.

He stressed that physicians were bettered positioned more than any other group to utilise their God given potentials and attributes of medicine and politics as veritable tools for national building and sustainable advancement of the medical profession.

According to him, when credible doctors with good conscience step in to the political rings, politics in Nigeria will regain its noble status and the medical profession will be advanced.

”I urge you to take up courage and rise up to the challenge of leadership and actively participate in politics, especially having been sensitized by this modest presentation on the harmony that exists between medicine and politics,” he said.

In his remarks, Kogi State Governor, Alh. Yahaya Bello, encouraged the medical practitioners to be sacrificial and dedicated to their profession as well as being active in politics.

Represented by his Deputy, Chief Edward Onoja, the governor said that his administration had achieved tremendous infrastructure development in the health sector.

He assured that the State Government would do her  best to ensure that the best brain in terms of manpower is retained to manage those infrastructure to avoid brain drain.

On his part, the Chairman NMA Kogi, Dr. Abubakar Alhassan, thanked the Governor for the implementation of the revised CONMESS 2014, as well as the unprecedented infrastructure development in the state’s health sector.

He, however called on both State and Federal Governments to initiate policies and programmes that would minimizlse the mass exodus of doctors out of the country.

The chairman noted that the outgoing NMA EXCO had made tremendous achievements in fulfilling some of its campaign promises.

According to him, they have improved the welfare of members; making NMA Kogi more visible and vibrant,  brought maturity into its affairs and workings, engendering financial transparency, and strengthening  all its affiliates.

Also speaking, the Chairman Local Organising Committee (LOC), Dr Adeyemi William, said the event was organised annually to educate members on the job and the emerging threats in the professor.

The Director of Publicity NMA Kogi, Dr Emmanuel Bola Kelvin Jonah, stressed the need for government at all levels to create the enabling environment for medical practitioners to operate to avoid braindrain.

Other speakers also spoke on Sub Themes, such as: ”Emerging and Reemerging Infectious Diseases”; ”Renal Care Delivery in Kogi State, Challenges and Prospects”; and ”Clinical Governance”.

The NMA Kogi, presented an award of recognition to the Governor for his unprecedented contribution to the development of the health sector.