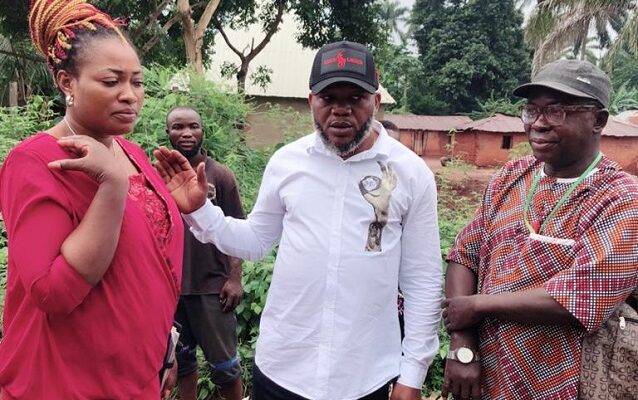 Pandemonium gripped the sleepy town of Ogene Igah in Olamaboro local government of Kogi state when the Vice Chairman of the council, Hon. Blessing Ekele escaped death by whiskers as a yet-to-be identified gunmen invaded her residence and shot sporadically with intention to harm her.

It was gathered that the Vice Chairman of the council had a close shave with death on Wednesday 11th August 2021 at about 7.pm when the agents of death came calling at her house and triggered off shots that would have snuffed life out of her.

According to an eyewitness, the gun shots were so massive and it scared the young men in the village from holding brief before the arrival of the security operatives to the scene of the incident.

It was said that when the young men and vigilante group who would have intervened and resist the invading miscreants, came out they were afraid to go close to them because they have no weapons to confront them.

Recounting her ordeal, Ekele said; “I was by the road trying to make calls due to lack of network in my village. Suddenly, I heard gunshots and turned to look at the direction of the sound of the shots, and I saw live bullets coming at my direction.

“A vehicle, on charter from Otukpa, conveying a woman and her two sons said to be mentally unstable and her sister was flagged down. I saw four young men ran out of bush, firing and asking the driver to pack. At that point, I ran into the house.

“The gunshots were massive and after a while, they came to my house and fired about 7 shots, and released more bullets after my house. They abducted the driver of the Golf car, took the woman’s phones, money and ran back into the bush.”

The local government vice chairman said the patrol team of men of the Nigerian Police Force, Navy, Neighborhood Watch and vigilante group came to the scene of the incident that night and took the woman and her sons to the police station at Okpo, the headquarters of the local government.

However, Hon. Friday Adejoh Nicodemus, the Executive Chairman of Olamaboro local government, who was among the early callers at the residence of his vice chairman to sympathise with her over the incident vowed to uncover the hideout of the criminals that are terrorising people in the axis of the state.

In a swift reaction, the council chairman held a closed door meeting with security agencies in the areas, including  the local vigilante group, neighborhood watch and hunters.

He charged the security outfits to synergise and fish out the perpetrators.

Although, unconfirmed report held that the attackers may be Fulani herdsmen, but a source said no matter the status of the criminals, they won’t have succeeded without an insider.

As part of the decision to rid the area off criminals, especially from Inele to Otukpa branch and other axis being used by the men of the underworld, the council has constituted a joint task force which comprises men of Nigerian police force, operatives of Navy, neighborhood watch, hunters and the vigilante group.

Already, some equipment that suppose to assist to ease out their operations were said to have been provided to the constituted group, especially the vigilante group and hunters, by the council.

Shortly after a closed door meeting of the constituted joint task force, the council chairman, his vice and the team visited the scene of the incident for first hand information that will assist  the newly inaugurated security task force to have a direction of operation.

It was learnt that the task force has started combing the bush of the areas since Thursday 12th to fish out the perpetrators of the dastardly act.