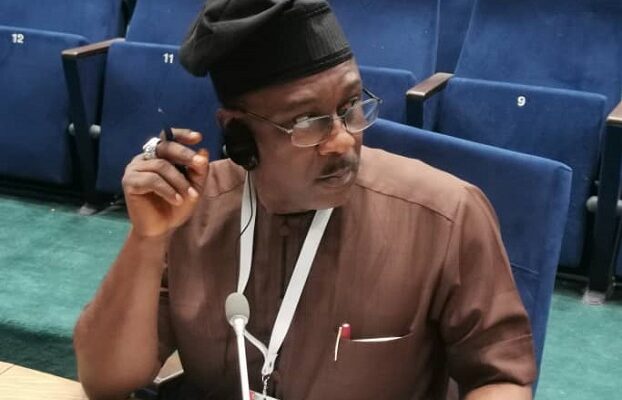 Nigerian lawmaker, Senator Smart Adeyemi has called on lawmakers from the Fifteen Member States of the Economic Community of West African States (ECOWAS) to ensure that resolutions adopted at the Parliament sessions are implemented meticulously in their National Parliament.

Senator Adeyemi made the call while speaking to newsmen at the venue of the Parliamentary Seminar in Lome, Togo, with the theme: Application of the Supplementary Act on The Enhancement of The Powers of The Parliament in Light of The Restructuring of The ECOWAS Commission.

Adeyemi, who represents Kogi West Senatorial district in the Senate, observed that over time, most resolutions adopted by the Parliament are yet to be implemented by member states, hence the Impact of the Parliament is not felt across the region, nor does it contribute to the advancement of the Parliament.

“I do know that as a serving senator, there are International conventions which must be domiciled in respective states and Nations before they can be taken as Laws.”

“In essence, most of the international resolutions that Nigeria is a signatory to was first brought to the floor of the Senate, and the House of Representatives.”

“But in the case of the ECOWAS Parliament, Resolutions have not been anyway presented before the National Assembly in any form, so it amounts to a waste of resources and a waste of time.”

“If we pass resolutions and it is just communicated to the Member States without any form of enforcing mechanism in place, I think there is something that is missing.

“This Parliamentary seminar has been able to address salient things in the formation and structure of the ECOWAS Parliament itself.

He further urged fellow MP’s to ensure that resolutions that are adopted by Parliament are implemented by their various National Assembly as well as encourage the Parliament to come up with a monitoring mechanism.