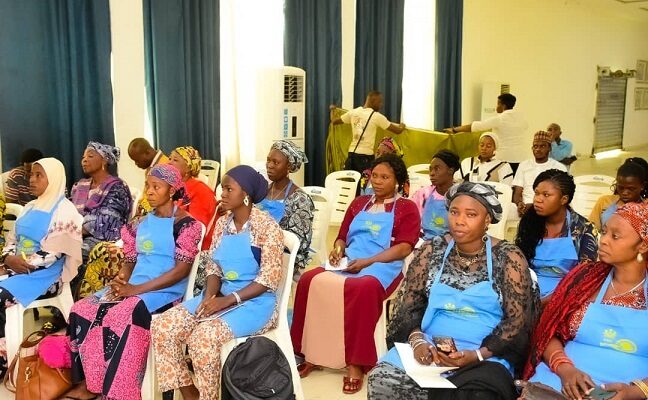 The Federal Government has trained 42 cooks under the Home Grown School Feeding Programme (NHGSFP) in order to build their capacity and ensure a healthy and safe hygienic environment for pupils, tagged: ”Nationwide Documentation and Training of Master Cooks on NHGSFP”.

Speaking at the venue in Lokoja, the Minister, Federal Ministry of Humanitarian Affairs, Disaster Management and Social Development (FMHADMSD), Hajia Sadiya Farouq, said the training was to build the capacity of the cooks to ensure safe and healthy meal for the pupils.

The Minister, who was represented by the Nutritional Assistant on NHGSFP, Mrs Susan Simpa, said the 42 participants would go back after the training to their various local governments to cascade it.

According to her, two cooks were selected from each of the 21 local government of the state, who will in turn train 20 cooks each in their locality.

She noted that the NHGSFP was a component of National Social Investment Program (NSIP), established by President Muhammad Buhari to bringing poor Nigerians out of poverty.

”The training is organised to build the capacity of the cooks to know how to make their environment more hygienic and safe for meal preparation for the pupils.

”This is to ensure that these children are giving healthy and safe meal in their schools under hygienic environment,” she said

She added that it would also improve the hygiene pattern of the NHGSFP implementation, adding that the federal government had also provided quality feeding utensils for every child on the programme.

Earlier, Mr Suleiman Onyekehi, the NSIP Focal Person, Kogi State, said the idea was to improve on the quality of food and nutritional values being prepared for the pupils, anf increase children enrollment in school.

Onyekehi, who is also the Special Adviser to the Governor on Special Projects, stressed that the federal government was taking the program seriously because of its purpose and objectives.

He urged the participants to listen attentively to ensure a thorough compliance with the national guidelines, noting that the State Government would disengage violators of the guidelines.

”So, I want you to take this training very seriously, and also see the program as a service to humanity,” he advised.

He said that the NSIP Kogi had recruited 2,933 cooks for the NHGSFP, while over 800 recruited additional cooks awaiting final approval to accommodate remaining schools and pupils yet to benefit from the program.

He noted that the delay was as a result of the nationwide pupils enumeration exercise.

He emphasised that NHGSFP has empowered the cooks, smallholders’ farmers, increase children’s enrollment, and boosted the state’s economy through the value chain.
.
He appreciated the Minister for doing all her possible best to bridging the structural gaps for effective performance.

He disclosed that the federal government had approved the increase in cost of meal per child from N70 to N100, but yet to be implemented.

He, therefore noted that the federal government was doing its best to commence the implementation probably when schools resume for third term.

Mrs Fatima Abdulmumin, a participant who spoke on behalf of the Cooks, said the cooking had been nice, adding that their major challenge was the cost.

”The cost per child is N70 but we are hoping the federal government will increase it to N100 as they have promised because things are now very cost in the market,” she said.

Earlier, the minister’s representative, Simpa, handed over aprons and feeding utensils to Onyekehi for onward distribution to the cooks after the training.