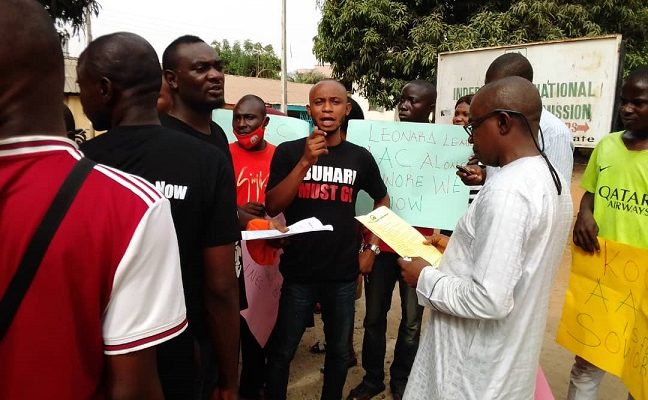 Hundreds of protesters, on Monday, stormed the office of the Independence National Electoral Commission (INEC) in Lokoja, Kogi State capital, over alleged imposition of Leonard Ezenwa as the National Chairman of African Action Congress (AAC).

They insisted that Omoyele Sowore remains the National Chairman of AAC.

The protesters alleged that INEC is conniving with the political elite in the country to deny Nigerian masses the right of association.

The Lokoja protest, which is part of the nationwide action to express displeasure over INEC’s biased stand on AAC leadership, accused the electoral umpire of executing a grand plan, working out the script of the entire ruling elite, to shut out the working people from the electoral arena ahead 2023 general elections.

“In my humble view, Omoyele Sowore remains the extant National Chairman of the African Action Congress (AAC).
My position is premised on the extant provisions of the Electoral Act (as amended). I am of the view that the purported imposition of one Leonard Ezenwa as the National Chairman of the party without majority support of the National Executive Committee and working in cahoot with a minority in the National Working Committee is in flagrant violation of the Electoral Act (as amended).

“We are concerned that it has been the consistent pattern of the Independent National Electoral Commission (INEC) to provide false legality to factional NEC meetings or conventions with its statutory attendance.

“I recall the circumstances of the purported removal of Omoyele Sowore as National Chairman of the African Action Congress (AAC) which coincides with his arrest and incarceration for the August 5, 2019 Revolution Now Protests and the purported National Convention which purportedly validated it.

“What is clear as noonday is that there is a grand plan on the part of the Independent National Electoral Commission, actually working out the script of the entire ruling elite to shut out the working people from the electoral arena, come 2023 general elections.

“The National Assembly,more or less a gathering of ruling class ambassadors , surreptitiously inserted into the Constitution of the Federal Republic of Nigeria(1999 as amended) Section 225(a) which provides among others that a party that fails to win a Councillorship seat in a local government election should be deregistered by INEC. The question to ask is that as at today , as local government elections been held in all the states of the Federation ? The answer is NO.

“However, INEC purportedly relying on the provisions of the said Section 225 (a) of the Constitution of the Federal Republic of Nigeria (1999 as amended) has gone ahead to deregister left and radical political parties such as the Socialist Party of Nigeria and the National Conscience Party.

“I call for a fighting alliance of left and radical political parties such as the African Action Congress, the Socialist Party of Nigeria, National Conscience Party and the yet -to-be registered Movement of the People, which will face the same bourgeois electoral hurdles to gain registration.

“I call for exhaustive discussions within the ranks of the Joint Action Front, the Coalition for Revolution, the Alliance for Surviving Coronavirus and Beyond and the National Consultative Front as well as labour centres in Nigeria – the Nigeria Labour Congress, the Trade Union Congress and Federation of Informal Workers’ Organisations of Nigeria with all professional associations including the Nigerian Bar Association, the Nigerian Medical Association, etc on building an all-encompassing movement against all these monstrous attacks on our democratic and electoral space,” he said.

Apeh called on INEC to immediately hands off the African Action Congress (AAC).