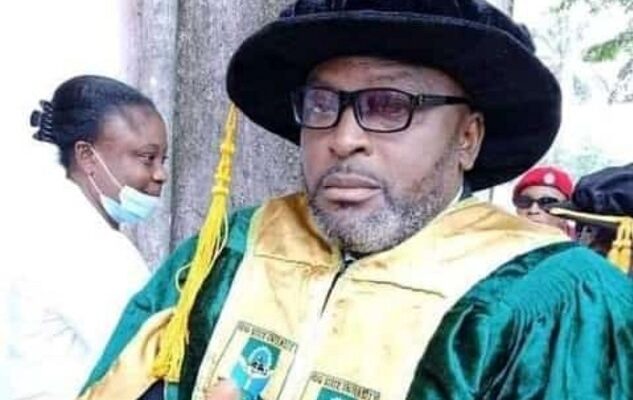 Prince Abubakar Audu University (PAAU), Anyigba on Friday announced the elevation of Dr. Daniel Friday Atidoga from the status of Associate Professor to a full Professor of Law with effect from 1st October, 2021.

Before his newest elevation to the professorial cadre by PAAU, Prof. D. F. Atidoga has been a Professor of Law appointed by University of the Gambia while on technical assistance at Banjul.

Professor Daniel Friday Atidoga is a very young man born into the noble family of the Atidogas of Agala (Agala “Republic” as he has always fondly referred to his native home), in Anyigba, Dekina L.G.A. of Kogi State, North Central Nigeria, on the 1st of December, 1975.

In his quest to be the best of his kind educationally, this young determined Professor of Law proceeded to School of Basic Studies (SBS), Makurdi between 1994–1995, and obtained his ‘A’ Levels (IJMB) Certificate, with an exceptional 14points score.

In line with his irresistible zeal which is powered by divine ‘Energy’, Prof. Atidoga was admitted to study Law at the prestigious Ahmadu Bello University, Zaria in the year 1997, and graduated in 2002 with an LL.B Hons degree. Thereafter, he attended the Nigeria Law School from 2002-2003, where he obtained his BL. In his determination to excel in the academic line, Prof. Atidoga attended Usumanu Danfodio University between 2008–2009 and was awarded Postgraduate Degree in Education (PGDE).

Attesting to the unusual qualities of this ‘man of book’, Prof. Atidoga was simultaneously running his Masters of Law Program (LLM) with his PGDE Program in two different Nigerian Universities!

Although this bold step caused a little delay in his Masters Program which he enrolled for in 2005 at Ahmadu Bello University, Zaria, it nonetheless paid off when he was awarded his LLM by the said University in 2010.

Prof. Atidoga’s quest to reach the peak of his academic career saw him enrolled for his PhD (Law) Program at his alma mater, Ahmadu Bello University, Zaria in 2011, and in 2015, he became a Juris Doctor with the award of Doctorate Degree (PhD) in Law. His area of research interest is on Comparative Criminal Law & International Crimes. Despite getting the highest academic qualification in law (PhD), Prof. Atidoga never said ‘good-bye’ to learning and academic advancement. In this regard, he has undertaken numerous Continuing Capacity Building Courses internationally. These Courses he has undertaken can be grouped in three categories. The first is the International Criminal Law and Global Affairs Courses, the second has to do with Educational Leadership and Management Courses, while the third centers on Criminal Law and Criminology Courses. (Also read: https://kogireports.com/chronicles-of-professor-d-f-atidoga-the-new-dvc-kogi-state-university/).

Prof. Atidoga was appointed as Deputy Vice Chancellor (Academics), PAAU in the year 2020. His recent elevation to the rank of full Professor is very deserving having regard to his track records of academic excellence, honesty and diligence.

It is said that when a child washes his hands clean he would dine with elders. Professor D.F. Atidoga indeed, washed his hands clean from the very beginning and this explains why and how he was able to “dine and wine” with great Professors of Law in Nigeria such as Professor K.S. Chukkol (OFR) and Professor M.T. Ladan, who are his personal friends.

With great passion, irresistible courage and unquenchable determination, Prof. Atidoga rose through the ranks from being a student and friend to these great Professors of Law to becoming a great Professor of Law like them almost at the speed of light!

According to Napoleon Hill, whatever the mind of man can conceive and believe, it can achieve. This is exactly what happened in Professor Atidoga’s life which has catapulted him to the glorious status he enjoys today! This sweet experience again, affirms the age-long saying: “Show me your friends and I will tell you who you are”!

Brad Henry once said that “a good teacher can inspire hope, ignite the imagination, and instill a love of learning”. Professor Atidoga, to say the least, is a good teacher who is generally admired and considered endearing by all his students and other people who have had personal encounters with him.

Prof. Atidoga is widely traveled both locally and internationally. He is a builder of men whom God Himself is building! We wish him well in his new status as Professor of Law!

– S. O. Akobe, a Law Lecturer at PAAU, and a former Student of Prof. Atidoga.

Spread the love
Tweet
Previous PostFlooding: 'We Have a Serious and Humanitarian Tragedy on Our Hands' - Kogi Governor Next PostKogi Poly Security Operatives Apprehend Another Suspected Cultist on Campus