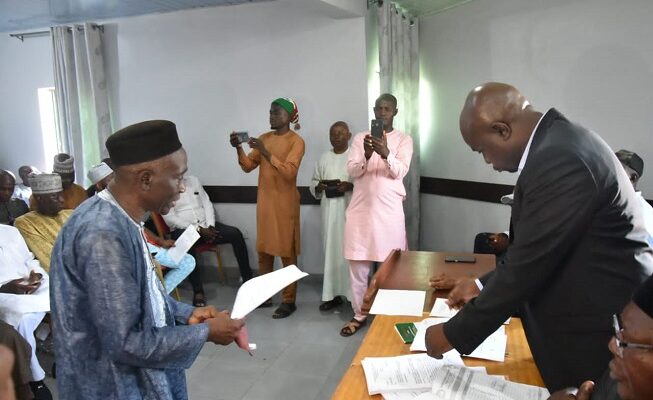 It was in high spirit, members of the Peoples Democratic Party (PDP) in Ijumu Local Government Area of Kogi state inaugurates new executive to run the affairs of the party for the next four years.

The party excos, totalling nineteen, were sworn in alongside fifteen ward chairmen across the Local Government by the party’s Legal Adviser, Barrister Mohammed Hadi Yusuf, in Iyara on Thursday morning.

Speaking at the party secretariat, the Local Government party chairman, Hon. Bode Olorunmaiye, who was there to oversee the affairs, having been sworn in by national officers at the national secretariat of the party in Abuja during last week’s convention, appreciated the entire people of Ijumu for the confidence they have in him.

According to a statement signed by Pastor Stanley Ajileye, on behalf of the Publicity Secretary, Olorunmaye said he was humbled by the overwhelming support from across the wards in Ijumu, despite the fact that he has no money to throw around.

According to him, this great support from party faithful has inspired a renewed commitment in him, with a solid determination to serve his party with all his strength.

He salute the courage of other contenders for the post, saying “we are brothers and we will continue to be brothers”

He said his administration will operate an open-door policy which will welcome all of them with open arms to come up with ideas that will move the party forward.

Olorunmaiye posited that, all contestants for the office of chairmanship, to be best of his knowledge, are all highly knowledgeable and equally qualify to be in that office.

He express conviction that, since all of them have invested greatly towards the uplift of the party, they will not allow their past efforts to be wasted. He therefore please with them to join hands with him in his drive at security victory for our party at all level.

Speaking to all the ward chairmen, Olorunmaiye enjoined them to fasten their belts for sincere efforts at turning things around for the party at various ward.

“Since we cannot pretend not to notice the differences in some of the wards as a result of the last Congresses, I will urge those of us who are favoured today, to be magnanimous in victory,” the chairman submitted, adding that, the first thing to do in office, is, pull the string of reconciliation.