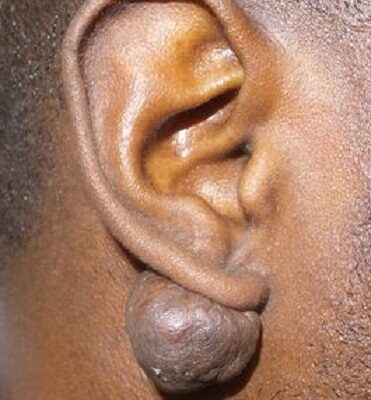 Before you pierce that ear, know that you might just be planting a seed of keloid.

If there is any fashion that is rapidly gaining acceptance amongst our youths, it is body piercing. It is now rare to see ladies in institutions of higher learning to still have the traditional single pierce per ear. In fact, some have for want of space—extended their pierces all the way to the ear tragus such that you see them wear up to five earrings per ear.

Their nose is not spared. It is now common to see ladies with pierces on both sides of their nose with big studs popping through them. If you are thinking that is strange, then, you need to know that some now pierce their nose septum to hang something that looks like a small padlock shackle.

The fashion of piercing was a ladies’ thing but men have now joined and are even competing with the ladies. Before now, the farthest men went with piercing was just an ear and it was really a big deal, but today, men do not just piece both ears, they wear dangling earrings and they go everywhere, including religious houses with it.

As this borrowed fashion continues to grow amongst our youths, especially those in institutions of higher learning, it is scary that most of them do not know the health challenge it poses.

Recently, I met a lady in her early 20s with early keloid on both ears, they were already as big as a grain of millet. I was really worried for her. I knew the magnitude of embarrassment that was waiting for her. I called her aside and asked what she was doing about her keloid but to my greatest surprise, she did not even know what keloid meant.

I was astonished by her ignorance which prompted me to take a survey. Strangely, I have asked over thirty young women with multiple ear pierces and not more than three have agreed to have heard or read about keloid. More troubling is the fact that these few who are aware of keloid believe strongly that it is usually the fault of the piercer. According to them, keloids result from piercings if the piercer is not a celibate. This is not just false, it is ridiculous and saddening.

For purpose of learning, I will try to explain what keloid is, though as a layman.

A keloid can result from exaggerated healing response after an injury. When the skin is injured, it produces tissue to cover the wound and in some unfortunate cases, the body fails to realize that the wound has healed, so it continues producing extra tissue to heal the wound which leads to a disturbing growth on the injured spot. This growth known as keloid usually increases for a lifetime, if not arrested.

Keloids are embarrassing, especially when they result from cosmetic injuries. Getting rid of keloid is difficult and at times, almost impossible. A surgery—incising it appears to be the way out, but just remember that keloids start from wounds, so, going under the doctor’s blade might just aggravate it, if not properly managed with kenalog injections on the scare for only God knows how long. Again, the injection might even result in additional keloids which will make the growth more disturbing. This is possible because the injection process is also an injury that requires healing.

I heard there are other means of taming keloid but apart from the cost, these procedures are hardly accessible.

I have gone under the doctor’s blade twice in trying to tame a single keloid and I do not think whatever you want to achieve with a new body pierce can be compared with the embarrassment, pains and cost of dealing with keloid.

Before you pierce that ear, know that you might just be planting a seed of keloid which you may continue to battle unsuccessfully for the rest of your life.