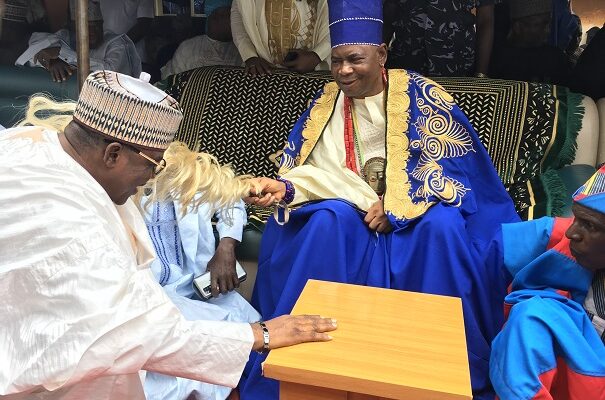 The Member Representing Ankpa, Omala and Olamaboro Federal Constituenc and Chairman of the House of Representatives Committee on Steel Development, Rep Abdullahi Ibrahim Ali Halims, has congratulated the Ata of Igala, HRM (Dr.) Matthew Alaji Oguche Opaluwa Akpa, on his one year anniversary as Ata Igala and Chairman of the Kogi State Traditional Council of Chiefs, wishing him many more years on the throne of his forefathers.

The Federal Lawmaker in a statement issued by His Coordinator of Information, Visual and Strategic (IVS) Operations, Comr Muhammed Nasiru on Thursday, commended the roles of the monarch in maintaining peace and security as well as unity across his Kingdom and the State at large stressing that peace is a prerequisite to societal development.

The statement being read in part, Hon. Halims said, “I join the entire people of Igala Kingdom in particular and Kogi State at large to felicitate His Royal Majesty on his first anniversary of assumption to the royal office.”

In addendum, the people’s Rep profoundly commended the mornach for using the opportunity of his anniversary to confer traditional titles on some Igala sons and daughters along with the Chief of Staff to Kogi State Governor, Pharm Asuku in recognition of their contributions to the socioeconomic development of Igala land as he urged the recipients to uphold the virtues that attracted them the honour.

Notable recipients are the immediate past Governor of Kogi State, His Excellency Capt. Idris Wada, the Director General of the National Productivity Centre, Dr. Kashim Akor, the Chief of Staff to Kogi State Governor, Pharm. Abdulkareem Jamiu Asuku and a former National Women Leader of the APC, Hajiya Salamatu Baiwa.

Concluding, He prayed God to grant His Royal Majesty long life and good health on the throne while urging him to continue to be a purposeful unifier and nationalist to uphold the peaceful coexistence among the diverse ethnic groups of Kogi State in particular and the country in general.