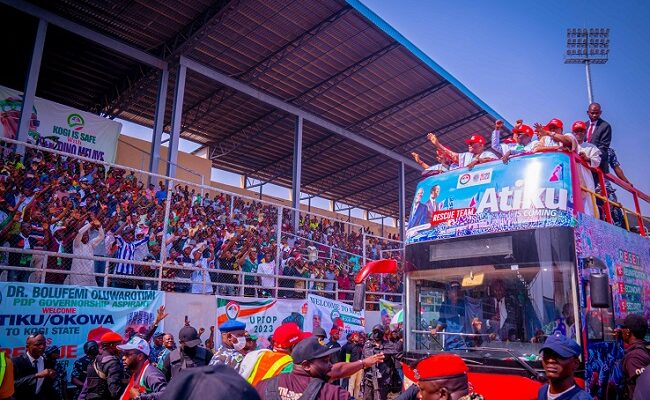 The spokesman, Atiku/Okowa Campaign Organization, Kola Ologbondiyan, has commended the people of Kogi state for coming out with a massively unprecedented crowd in solidarity with the PDP presidential candidate, Atiku Abubakar, at the state rally held in Lokoja on Saturday.

In a statement issued on Sunday, Ologbondiyan said the massive support demonstrated by the people of Kogi State, especially the youths, towards the Peoples Democratic Party (PDP) further confirmed their decisiveness to vote in Atiku Abubakar as the next President of Nigeria.

Ologbondiyan said the people of the state amply demonstrated that Kogi, just like majority of the states of the federation, is home to the PDP and that Atiku Abubakar will record a sweeping victory across Kogi state and others to emerge victorious at the first ballot at the close of the February 25th presidential poll.

“The people of Kogi State, like majority of millions of Nigerians in other states, have rejected the incompetent, violent, corrupt and anti-people All Progressives Congress (APC) and its Presidential Candidate, Asiwaju Bola Ahmed Tinubu, and they are eager to vote in Atiku Abubakar and the PDP which embody their hope, aspiration and determination for a better nation.

“Our campaign organization salutes the courage, resilience and energy which the youths of the State displayed at the rally, which signposts their preparedness to come out enmasse to vote for Atiku Abubakar on February 25, 2023 and to stand in defence of their votes to the very end.

“We appreciate the support of various groups including professionals in various fields, government workers, traditional institutions, faith-based groups, business community, traders, artisans, transporters, farmers among others towards Atiku Abubakar and the PDP.

The Campaign Organization charged the Independent National Electoral Commission (INEC) and security agencies to note the feelings and aspiration of the majority of the people and take steps to ensure free, fair, secure and credible elections across the nation.

The Atiku/Okowa Campaign, however, urged Nigerians to continue to mobilize for Atiku Abubakar ahead of the elections, while reminding those that are yet to pick up their permanent voters’ cards (PVCs) to do so in the collective desire to end the misery which the All Progressives Congress (APC) has come to represent.

Spread the love
Tweet
Previous PostNov. 2023 Kogi Gov'ship: Who is Governor Yahaya Bello's Joker in the Pack? Next PostDon't Sell Your Vote, I'll Not Disappoint You - Okai Begs Dekina/Bassa People