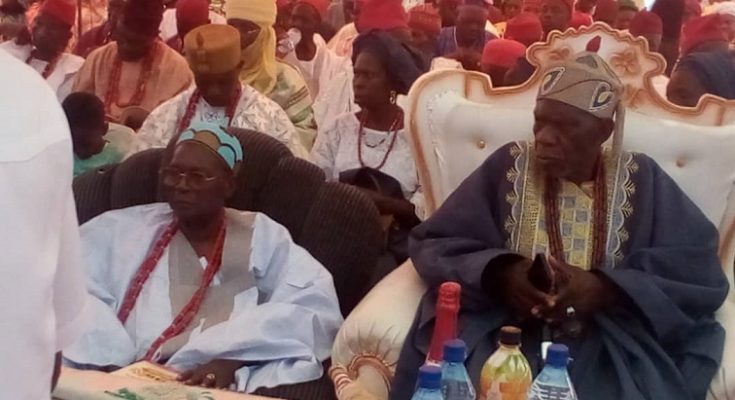 Men from all works of life converged on the playground of Universal Basic Education Primary School Iyamoye in Ijumu Local Government Area of Kogi State on Saturday April 3rd, 2021 to celebrate the 15th coronation anniversary of Obaro of Iyamoye, HRH Oba Ibrahim Ademiluyi Momoh with funfair.

It was also the celebration of the culture as the entire Iyamoye community temporarily relocated to the event venue with different cultural groups, age groups, ethnic groups, clubs and societies and masquerade dancing with vigour to outshine one another while rejoicing with the celebrant, Oba Momoh, who ascended the throne of his forebears was not just celebrated for the fun of it but for the laudable community services he had rendered before ascending the throne and even after.

Records also have it that the monarch had been involved in traditional leadership before his ascension and since becoming a respected royal father that he is, peace and unity have reigned in his kingdom.

The community has equally being recording progress.

In his welcome address, National President of Iyamoye Development Union (IDU), Alhaji Murtala Akintola who praised the celebrant for the peace being withnessed since ascending the throne, said his reign has brought developments to the community.

Alh Akintola said it was based on the unprecedented achievements that the IDU and Obaro in Council decided to celebrate the royal father.

The IDU National President therefore appealed to Kogi State Government to upgrade the Obaro of Iyamoye stool to first class status, saying Iyamoye was the first port of call by their foundng fathers and thus the oldest town in Ijumu Kingdom.

While praising Governor Yahaya Bello on ridden off the state of bandits, criminals and kidnappers prevalent in other states, he pleaded that resident medical doctor be posted to Iyamoye hospital and teachers to the community schools.

In his speech, Chairman of the event who doubles as National President of Okun Development Association (ODA), Barr. Femi Mokikan rejoiced with the monarch and Iyamoye community on having an experience king on throne.

He urged the community to study their challenges so as to use it to chat new course for the future. Monarchs who graced the event include the Obaro of Kabba HRM Oba Solomon Owoniyi, the Olujumu of Ijumu Kingdom HRM Oba William Olusegun Ayeni and others.

Speaking differently, the Olu Adde of Ekinrin Adde HRH Oba Anthony Olajubu and the Ologidi of Ogidi HRH Oba Rabiu Sule, prayed God to bless the celebrant with long reign on the throne. They described him as one of the best kings in Okunland and beyond.

Politicians from both sides of the divides were not left out in the celebration.

In his goodwill message, representative of Kabba/Bunu/Ijumu Federal constituency at the National Assembly, Hon Tajudeen Yusuf who rejoiced with the celebrant, attributed the peace and achievements recorded in the last 15 years of Oba Momoh to God.

While explaining that only God enthrones Kings, he described the monarch as love personified and a bridge builder who accommodates everyone, urging him to continue to be a bridge builder that he is.

On his part, Chairman of Ijumu Local Government Area, Hon Taofiq Isah also rejoiced with the celebrant whom he described as an experience Oba.

The Chairman said while Oba Momoh was the Regent, he did all he could to ensure the appointment of a new Olujumu in record time.

The epoch of the anniversary celebration was the conferment of chieftaincy titles on some selected sons and daughters of Iyamoye as well as  notable friends of the town who have contributed to the development of the community.

The call of each of those conferred with chieftaincy titles to the podium added colour to the event as well wishers accompanied them with traditional dances. At the end, the masquerade took the stage performing to the delight of the spirit and the living.