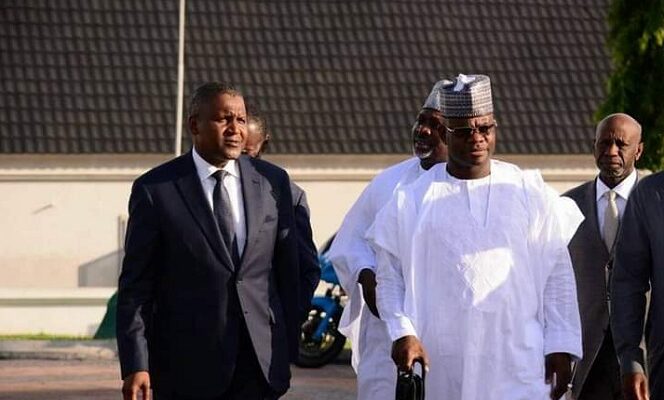 Dangote Industries Limited has filed a suit at the Court of Appeal in Abuja to challenge a ruling of a High Court of Kogi State seeking to give priority to a filed suit by the state government in ownership dispute over Obajana Cement plant.

In its suit, the Kogi State government had sought to, among others, void the agreements, dated July 30, 2002, and February 14, 2003, between the state and Dangote Industries Limited on the cement plant.

The government claimed lack of due consideration, which it argues, constitutes an essential ingredient in a valid contract.

But Dangote Limited filed a motion seeking that parties be referred to arbitration, as provided for in the agreement, and to stay further proceedings in the substantive suit, pending the conclusion of the arbitration process.

In a ruling on December 8, Justice R. O. Ayoola of the Lokoja division of the High Court of Kogi State, rejected the arguments by Dangote’s lawyers, Paul Usoro (SAN) and Reuben Atabo (SAN), that it was the practice that where a motion is seeking referral to arbitration, the court is required to first determine such motion before taking any further steps.

Justice Ayoola upheld the argument by Kogi State’s lawyer, Abdulwahab Mohammed (SAN), that it was tidier to hear Dangote Limited’s motion along with the substantive suit.

In the first group of appeal, Dangote Limited faulted the trial court for electing to hear Kogi State’s suit along with its motion on notice, “praying the court for an order staying further proceedings in the suit pending reference to arbitration and the conclusion of the arbitral proceedings and settlement of the dispute declared by the claimant pursuant to and in accordance with the arbitration agreement contained in the agreement between the parties that was executed on July 30, 2002”.

The company argued that Section 5(1) of the Arbitration and Conciliation Act, under which it applied for referral to arbitration, makes it imperative for the courts to take arguments on and determine its motion on a standalone basis before proceeding with any other business in the suit.

“A consolidated hearing of the appellant’s arbitral reference motion with the respondent’s substantive suit, as ordered by the lower court, would require the appellant to take ‘steps in the proceedings’ by filing its counter-processes in the substantive suit, contrary to the express provisions of Section 5(1) of the Arbitration Act,” it said.

Dangote Limited also faulted the Kogi High Court for ordering it to respond to the substantive suit when it was yet to hear and determine its motion for referral, as required under the Arbitration Act.

The company averred that the lower court, by its ruling adjourning the suit for a consolidated hearing of the appellant’s arbitral reference motion and the substantive suit, threatened to abridge the fundamental right of the appellant, as enshrined in Section 36(1) of the Constitution.

It argued that the lower court is without jurisdiction to entertain the Kogi State’s suit without first hearing and determining its motion seeking referral to arbitration separately.

“The provisions of sections 4 and 5 of the Arbitration Act, pursuant to which the appellant’s arbitral reference motion was brought, rob the lower court of jurisdiction to entertain the respondent’s originating summons howsoever prior to the hearing and determination of the appellant’s motion,” Dangoted Limited said.

On Ground Five, the company argued that the lower court was misdirected in law by failing to hear and determine its motion on a standalone basis, prior to determining any other issue in the suit.

It added that since the lower court failed to determine its motion, it is now left for the Court of Appeal “to exercise its discretion to hear and determine the motion as the court of first instance and make such interim orders which the court below is authorised to make or grant”.