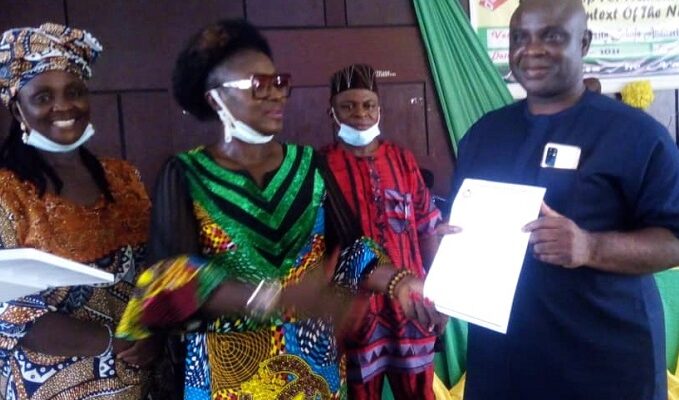 The National Youth Service Corps (NYSC) on Friday commended the Medical Director of Federal Medical Centre Lokoja (FMCL), Dr Olatunde Alabi, for his outstanding performance as one of the best Corps Employers in Kogi State.

The state NYSC Coordinator, Pastor Mrs Mofoluwaso Williams stated this while presenting a Letter of Commendation to Alabi, during the 2021 Corps Employers’

The Workshop was tagged: ”Optimizing the NYSC and Corps Employers’ Partnership for National Development in the Context of the New Normal”.

”The management and staff of NYSC Kogi State wish to commend you for your outstanding performance as one of the best Corps Employers in Kogi State.

”This commendation is in recognition of your immense contribution and support for the development of NYSC in the state.

”It is hoped that this commendation would further spur your organization to continue to collaborate with the noble Scheme in Kogi State and sound a wake up call to other corps Employers,” Williams said.

The coordinator explained that the medical director had helped the NYSC to equip their clinic with many equipment that were lacking.

She added that the FMCL had also been sending medical personnel to NYSC clinic at every Orientation course to run the clinic and give supervisory role to our corps doctors.

”Dr Alabi comes to camp every week to monitor the medical personnel and has keep donating drugs to the clinic during the orientation course.

”The medical director is a father and employs the largest corps members in Kogi State.

”Once they come to him, he employs them and he has been retaining the corps members that did well during the one year mandatory service”, she said..

She, therefore urged other employers to emulate the gesture, saying, ”doctor Alabi is an outstanding employer to beat”.

Responding to the commendation, Alabi thanked the NYSC coordinator for the honour, saying, ”it is a nice award which is just showing the role that FMC Lokoja is playing in the state, and also in the health sector.

”So, it is heartwarming to commend the FMC Lokoja for the role playing in keeping corps members and make them happy while they are serving in Kogi State.

”Some of the corps members that are fortunate are part of our work force, because when they come to serve and distinguished themselves and there is opportunity; we gracefully employ them.

”Some of them are still here, they came to Kogi to serve but they didn’t go back again. They also like the environment”, he said.

Alabi noted he did his own youth service in 1991 in Ogu in Enugu State where they had their orientation course, and his primary assignment in Aguata LGA.

Alabi said that he had a wonderful time during his service year, saying he was retained immediately after his service and work for over ten years in the state

”I am product of youth service, so whatever I become today, the Scheme has contributed immensely to it.

”The relationship between FMC Lokoja and NYSC has been very long and cordial. Our duty is that any corp members that is posted to our hospital, we make them happy.

”Though the economic climate is not easy now, we try to do the best while the corpers are with us because it is just one year mandatory service, so we make them happy”, Alabi said.