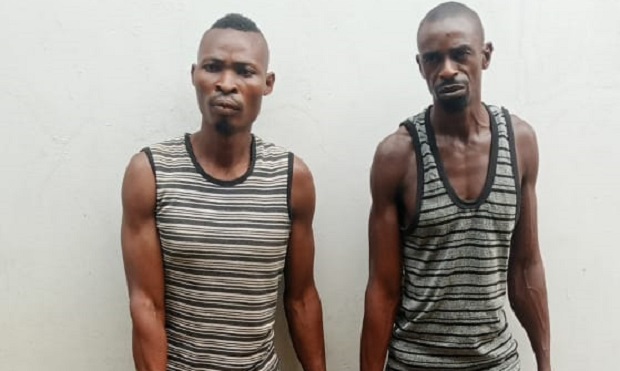 A staff of the Abuja Electricity Distribution Company (AEDC), Bamidele Rasaq, has been arrested by the Nigeria Security and Civil Defence Corp (NSCDC) for his alleged involvement in the vandalization of AEDC aluminium cables.

It was gathered that, the second suspects Isiaka John was formerly a casual staff of AEDC before he was disengaged.

Parading the suspects on Thursday, the Kogi State Commandant, Nigeria Security and Civil Defence Corp, (NSCDC), Suleman Ibrahim Mafara said the suspects have been in the dirty business for several years before luck ran out of them.

Mafara, stated that, upon interrogation, the first suspect (Rasaq) admitted to have vandalized the cables on five different occasions before he was arrested.

Explaining further, Mafara said “When my officers got an intelligence report about the nefarious activities of this AEDC staff and his friend, we immediately laid an ambush on him when he made an attempt to vandalize another AEDC cables.

“On the 16th May, 2022, at about 07:00hours, Rasaq came to vandalize the AEDC cables  and luck ran out of him, before he was arrested. Two month ago, the same Rasaq invited the other suspect (Isiaka John) to help him in his vandalization business”.

He noted that the management of  AEDC had since been communicated about the criminal activities of one of their staff which led to the termination of the suspect appointment with the organization.

“During our investigation, the management of AEDC identified Bamidele Rasaq as one of their staff. Interestingly, upon this confirmation, the suspect was served instant dismissal letter,” he added.

He added that the Command will soon conclude its investigation and prosecute the suspects in the court of law, stressing that, this will serve as deterrent to any individual that intends to engage in criminal activities in Kogi State.

While appealing to the general public to monitor the facilities installed in their various location, and report any suspicious character in their environment, Mafara warned all criminal elements to relocate from Kogi State.

The two suspects while fielding questions from journalists admitted committing the crime.

Items recovered from the suspects are electrical cables, pliers and a motor cycle.