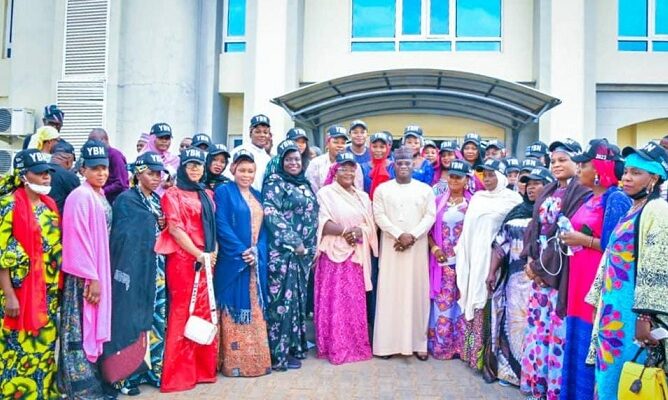 Women from Nigeria’s Nineteen Northern State have declared their support for Gov. Yahaya Bello of Kogi, naming him as their choice candidate to run for President in 2023.

The Group under the aegis, Yahaya Bello Network (YBN) made this known on Tuesday when they paid a visit to Bello at the Kogi State Governor’s Lodge, Abuja.

Hon. Hadiza Ahmed, Chairperson of the YBN said of all those that have shown intentions to run for President in 2023, Bello is their preferred choice considering all his achievements as governor of Kogi state.

Ahmed said that the achievements of Bello and seeing him as the best person to succeed President Muhammadu Buhari in 2023 have prompted a lot of Nigerians and the YBN urging him to contest for President.

She said that Bello has shown good leadership in Kogi state which can be seen across all sectors.

She also applauded the governor for being the most youth and women friendly governor in the country, which has gotten him a lot of international and national recognitions and awards.

“We are here to call on the Executive Governor of Kogi State, His Excellency, Gov. Yahaya Bello to answer our call as a youth to be our next President in 2023.

“Bello understands the needs of youth and women because he interfaces and work with them.

“Under his administration, youths and women are very involved, which is what we want to be brought to the national level, because that is what Nigerians are also clamoring for in 2023.

“The example has already been set in Kogi State and we are sure he will do it when he becomes President in. 2023.

In his response, Bello appreciated the group for seeing him worthy to be the right person to take over from President Buhari in 2023.

Bello said he has responded to their contest for President in 2023, promising not to fail them.

“I am very happy to receive you women today, and you are the first group I am receiving in 2022, calling on me to run as President.

“Since last year, a lot of groups have been calling on me to run for President and today, I have accepted your call and I promise not to disappoint you and all of Nigerians,” Bello said.

Bello said just as his administration has led for a united Kogi State, he will also ensure a united, safe and secured Nigeria.