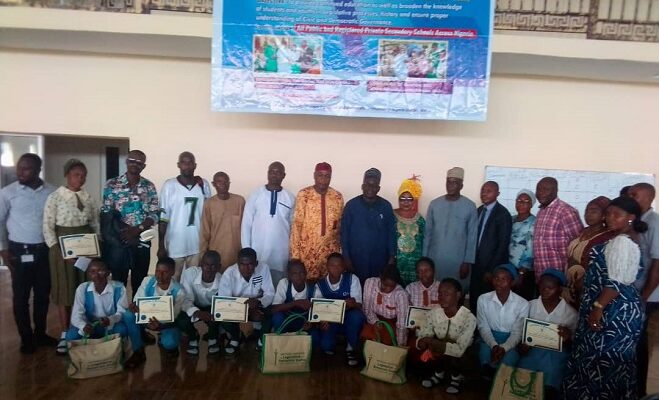 The GSSS Ogaminana emerged winner with 50 points, while Soladad Group of Schools, Okene, and Saint Peters College, Idah, came second and third with 40 and 35 points respectively.

In his remarks, Prof. Abubakar Sulaiman, the Director General of NILDS, said the quiz competition was aimed at encouraging the students to imbibe the reading culture, engaged in critical thinking, national consciousness and awareness.

He added that it would provide continued education as well as broaden the knowledge of students and youths in legislative processes, history and ensure proper understanding of Civic and Democratic Governance.

Sulaiman, who was represented by the State Coordinator of the competition, Mr Richard Isere, said the quiz would be conducted at three levels viz-a-viz state, zonal and grand finale at the National Assembly Complex, Abuja.

He said the winning team from each of the six zones and FCT would contest in the grand finale scheduled for November 28, 2022.

The director general urged the students to abide by the rules of the game in the true spirit of sportsmanship to avoid interference, so as to achieve the desired objective.

On her part, the Director, Education Support Services (ESS), Mrs Dora oyeyikpo, said the competition would increase awareness on the role of legislative in the nation’s democracy, among others.

Oyeyikpo appealed to all relevant authorities to engage youths in such competition to create a healthy academic rivalry among them.

She commended the Nigeria institute for legislative and Democratic studies for the initiative and urged other relevant bodies to emulate them.

Earlier, the chairman of the occasion who also doubles as the host school’s principal, Chief Godwins Yakubu, described the event as a welcomed development.

He commended the ministry of education science and technology for keying into the initiative of the national institute for legislative and Democratic studies.

Other secondary schools who participated in the state level competition include: GYB Model science School Adankolo, Our Lady of Schools, Anyigba, and Harmony Secondary School Lokoja.