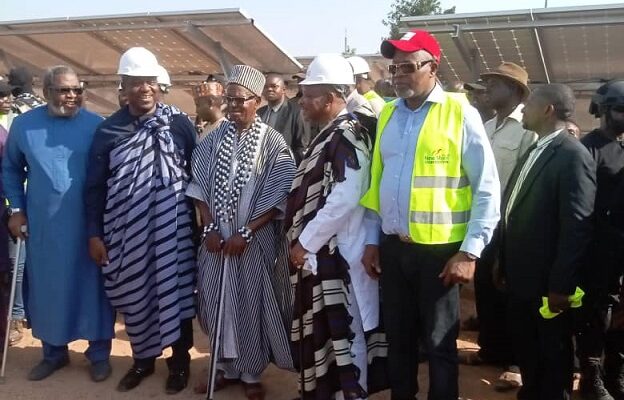 Founded over a decade ago, New Moon Nigeria Limited, a private firm committed to adding significant values to the lives of the Nigerian people through the provision of critical services such as power, supplies, building and civil engineering works is leaving footprints of excellent services on the sands of time.

The firm which also specialises in electrical installations- overhead and underground distribution networks, injection sub-station, transformer installation and a host other services, is being strengthened to stand in the gap as far as the energy need of the nation is concerned.

About a decade ago, the company decided to expand its vision and scope of services, and in doing this, it delved into renewal energy where it is providing thousands of Solar Home System and Solar street lights in various homes, communities and cities across Nigeria.

The vision of its Managing Director and CEO, Chief(Engr) Oluseyi Henry Omotosho, from the beginning is to build a brand that would pioneer a revolution in the renewable energy sub-sector in Nigeria.

Others are; 80KWP solar mini-grid at Bolurunduro Nsegba community of Ekiti State and 80KWP Makasauro mini-grid in Katsina state as well as thousands of Solar Home System in the north western state of Katsina.

The Atekombo power project, one of the Constituency projects of Senator Gabriel Suswam was designed to provide uninterrupted electricity to 136 households, 14 commercial shops amongst others.

Speaking at the commissioning ceremony, Honourable Minister of State, Power, Goddy Jedy-Agba, OFR, said that the project was one of the many implemented under the Renewable Energy Micro-Utility Programme (REMU) of the Federal Ministry of Power.

According to him, “the philosophy behind the project is to utilize the widely distributed solar resources at remote areas for provision of sustainable, environmentally friendly, and affordable power supply to rural and remote areas”.

While noting that the plant was built with capacity for possible connection to the grid in the future, he explained that the scope includes more than 14km Township Distribution Network (TDN) and service connections as well as installation of 160 smart meters and local electronic vending system.

The minister reiterated the commitment of the Buhari  administration to continue to deploy renewable energy solutions to bridge electricity gap in the country.

Benue State Governor, Samuel Ortom who was represented in the event by his Chief of Staff, Dr. Gabriel Tirlumun Ngitse commended the federal government for the project even as he appealed for more of such projects in the state.

Also speaking, Chairman, Senate Committee on Power and the Senator representing Benue North East Senatorial district, Gabriel Suswam said that he was delighted that finally, Atekombo community which was in darkness for many years will now enjoy steady power supply.

Suswam, a former Governor of Benue State, who said the project was one of his constituency projects, charged the community to take ownership of the project by protecting it against vandals.

He warned  against politicization of the project, saying that it’s a public and not a political party project, and pointed out that nobody or household should be denied access base on party affiliation.

Managing Director/CEO of New Moon Nigeria Ltd., Chief(Engr) Oluseyi Henry Omotosho, pointed out that the quality of materials for the project and engineering are comparable to what obtains in the developed economies of the world.

According to him, the  Atekombo 100KWP hybrid mini-grid means that one more community is being lighted up. “The implication is that we are inching towards the universal goal of world-wide access to affordable, reliable and cleaner energy”.

He stressed that, “Remember that increased use of renewables that will contribute to climate change mitigation is an important part and solar energy fits perfectly into this goal”.

The  company, New Moon Nigeria Limited, he said, is at the forefront of the institutions that are driving the change and energy transformation that solar energy is fast becoming in Nigeria and the world over.

The project, he pointed out, is comparable to what obtains  in Europe, Asia and other parts of the developed world. “The materials – solar panel, batteries, inverters and other components are of the highest quality. We can hold our heads high that we have delivered quality services here”, he asserted.

New Moon Nig Ltd, he remarked, is actively engaged in the business of lighting up Nigeria. “As a company, we have done several projects like this such as the 80KWp Upake Mini-Grid in Ajaokuta Local Government Area of Kogi State, 80KWp Solar Mini-Grid at Bolorunduro Nsegba Community in Gboyin Local Government of Ekiti State, and Makasoro 80KWp Mini-Grid in Katsina State”.