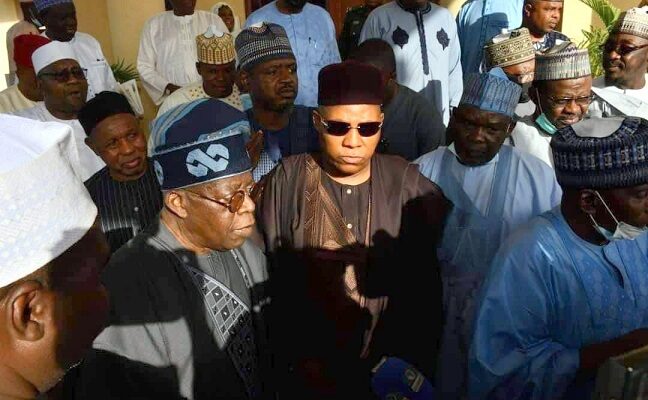 First, good numbers of Christians don’t care about politics they only vote during election so, ‘na there the see finish’ starts from.

Many of them has even insulted us for participation in many of our political process over the years.

The opinion that Asiwaju Bola Tinubu’s selection of his running mate is about Competence is actually a lie and insult to Christendom because I know we have many Competent Northern Christians who could do Better. He did that to pleased the northern Muslims to have their votes during election since Atiku and Kwankwaso are already from the north and Muslims so he was boxed to the corner to do what he has done

Election is for the winning by the party in the first place, it’s not played by emotions.

BAT could have settled for unpopular VP candidates just like we did when he presented Osibanjo and Buhari still win but to be honest it’s a different ball game now.

Those who worked with APC back then to make this happened are all back to different party gunning for same office (ATIKU, Kwankwaso and Saraki) so it’s going to be a tough one even though as at then Buhari candidature is overwhelming in the north and just need a Southern Christian or a pastor to disabused many people mind that already see him as religion fanatic just like El-Rufai of Kaduna .

When I noticed the Northern Governors interest is for the president to go to Southern Nigeria, I quickly pray it should be Christian Southerner so that we can easily picked our Vice president from the North and a Muslim because not all Muslim northerners sees Tinubu as a Good Muslim in the first place for even allowed his wife to be a practicing Christan so they need to really gives him a close watch.

I will bodily say, That the Northern Governors who were all jostling for vice president Except GYB and don’t care what happened next land APC into this situation and our president who don’t care how APC is been run after all he is the major beneficiary of APC so far in Nigeria.

It will only interest you to know that when power returned back to the north after Tinubu Presidency it will be another Muslim which mean it will be 24years straight Muslim presidency in Nigeria.

Since the role of the church is to be praying for those in government alone and demonizing some of us playing it, they should stop wailing and work with the available options before them if they are serious.

Even before Tinubu selected his Running mate yesterday they are those who already made of their mind they will not vote for him and has their preferred candidate so this will actually not change their mind to do otherwise.

For me , My position is very clear from the beginning that Nigeria is a secular state and for that the two major religion should always be carried along for the unity of our great country just like the Northern Governors sees reason then the president should go to South for equity and justice.

We should also know this that Tinubu as a person isn’t a religion bigot and this isn’t his idea in the first place but one of the conditions from the north and he has to gives ear to that before he can win northern votes at all cost since we already have Atiku and Kwankwaso in the ballot, he already have interest in Rt Hon Yakubu Dogara who is a Christian from Bauchi to be his running mate even before he joined the race for Presidency.

I really feel for him, because he may not get good numbers of votes from southern Nigeria most especially the Christians and Obi is gradually getting some supports from North as he picked Yusuf Baba as his running mate.

Yusuf Datti Choice is a game changer from the north no matter How you look at it.

We shouldn’t also used 1993 Presidential election that we have Muslim Muslim in the ballot to judge this because we aren’t this pluralized along religious line as we are as at today in Nigeria.

It’s going to be an interesting election and it’s my prayer my party ( APC) Reign Beyond 2023 by God’s grace.