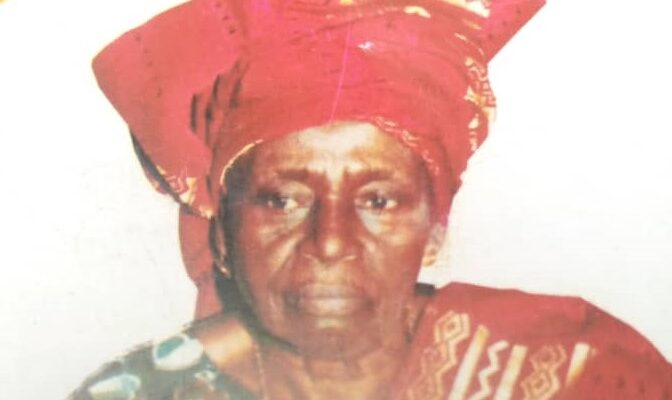 It was a celebration of a fulfilled and well spent life as the remains of Madam Maria Ebun Toba, the matriach of  Awarun Toba’s family was finally committed to mother earth at her country home, Odo-Egbe, Egbe Kogi State.

At the thanks giving service in honour of Madam Maria Toba held at 2nd ECWA Church Egbe Kogi State, encomiums were poured by children, family members, church secretary, members of the clergy and laity while giving testimonies on the good life Mama lived and the legacy she left behind.

There were also renditions of various songs by different choirs from Ilorin, Kwara State, Lokoja, Kogi State and from Egbe in Kogi State, praising God.

In his homily, Rev Dr John Sunday Owoeye who read from Hebrew 13 verse 14 which reads: For there is no permanent city for us here on earth; we are looking for the city which is to come, urged the congregation to always look forward to the Kingdom of God which is heaven.

According to Rev Owoeye, Christians should ensure they work towards inheriting paradise, stressing that man’s stewardship on earth should be geared towards getting the ultimate.He said Christians  who perform one chore or the other in the vineyard of God should do it with commitment so as to access paradise.

The cleric described Madam Maria Toba as a committed and selfless Christian who put her children and those within her reach on Christ’s path, just as he urged the congregants to emulate her positive disposition.

Also, the Elegbe of Egbe ,Oba Ayodele Irukera and the Egbe Traditional Council were present at the funeral thanks giving.

Speaking at the funeral service through one of his High Chiefs, Oba Ayodele Irukera described mama as a woman who trained her children to be patriotic citizens of Egbe, pointing out that this was the reason all her children have been pace setters in  contributing towards the development of Egbe.

The monarch also described the deceased as one of his valuable citizens whom the entire Egbe would feel her demise, adding that her death should not be mourned but celebrated having attained the glorious age of 105.

Chairman of Nigeria Union of Journalists, Kogi Council, Comrade Adeiza MomohJimoh, who had official engagement in Nasarawa State was represented by the Council’s Treasurer, Adebayo Aka.

Mama is survived by many children, grand children, relatives and grate grand children. Among her children is Mrs Agnes Yejide Ekundayo, one time Chairperson of National Association of Women Journalists (NAWOJ) Kogi Council.