Home News Kwankwaso’s Visits to Ogbonicha, Lokoja and the Imaginary Attack on His Convoy 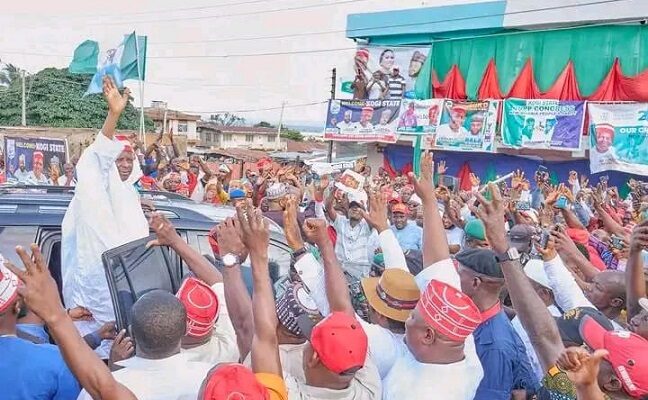 Kwankwaso’s Visits to Ogbonicha, Lokoja and the Imaginary Attack on His Convoy

The presidential candidate of the New Nigeria People’s Party, Senator Rabiu Musa Kwankwaso, on Wednesday visited Kogi state to commission party’s new state headquarters. His first point of call was the Ogbonicha residence of his bosom friend and former governor of the state, late Prince Abubakar Audu. There, he met with late Audu’s family, visited his tomb and prayed that Allah SWT continues to grant him eternal rest, and bless the huge legacy he has left behind.

Straight from Ogbonicha in Ofu local government area of Kogi state, Kwankwaso and his team moved to Lokoja, the state capital where he was received by an enthusiastic crowd at the new party headquarters adjacent Alheri junction, along Ibrahim Taiwo road.

The NNPP presidential candidate commissioned the new party office and retreated to a popular hotel in GRA to hold strategic meeting with party leaders and candidates. He slept in Kogi and left the state on Thursday around 3pm.

However, mischievous reporters went to town with a blatant fake news insinuating that Kwankwaso was booed by NNPP supporters and his convoy pelted with stones. This is ridiculous. Kwankwaso moved around Kogi in broad daylight, and we can confirm on good authority that nothing of such happened.

The Governor of Kogi State, Alhaji Yahaya Bello is a peace-loving man and too security conscious to allow such happen in the state without immediate consequences.

In his reaction, the spokesperson for RMK presidential campaign organization, Barr. Ladipo Johnson, called on journalists to uphold the ethics of the noble profession.

Johnson called on the deviants among journalists to desist from misleading the public, especially in such perilous moments.

“We wish to categorically and unambiguously state that these stories are fake, unfounded and ridiculous.

“Since his arrival in the state, Sen Rabiu Musa Kwankwaso has received nothing short of love from the good people of Kogi State. On Wednesday, he visited the family of his bosom friend, the former governor of Kogi State, late Prince Abubakar Audu at their country home. From there, he proceeded to the Lokoja city centre to commission his party’s new state headquarters.

“We wish to state that in and between these two locations, the presidential candidate’s convoy was not at any point pelted on or received unfavorably by the good people of Kogi State.

“Additionally, contrary to media accounts on the purported attack, we categorically confirm that there is no person named ‘Musa Yunusa’ on the Kwankwaso media team. Therefore, the media cannot rely on a phantom name to establish a supposed incident that never happened in the first place,” he said.