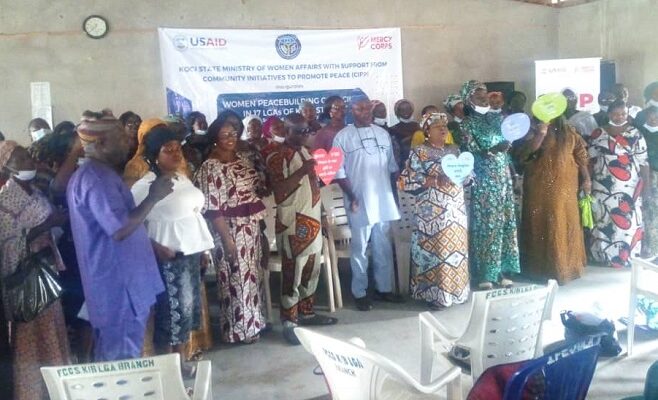 Speaking at the inauguration ceremony in Kabba on Wednesday, the Commissioner for Women Affairs, Hajia Fatima Buba, noted that the Mercy Corps-CIPP intervention was meant at promoting peace in the state.

She noted that the Mercy Corps-CIPP had earlier inaugurated the peace building committees in four local government areas of Lokoja, Dekina, Igalamela and Yagba west.

She added that the ministry was collaborating with Mercy Corps-CIPP to extend the peace building committees to cover the remaining 17 local government areas of the state.

Represented by Mr Teddy Adegbola, the Permanent Secretary of the ministry, the Commissioner stressed that the committees would strengthen mechanism for crisis engagement, resilience and early recovery from crisis at the grassroots.

She urged the committees to engage the youths and women in various communities to discourage violence and embrace peace towards the 2023 general elections.

”You are now indirectly the eyes of the ministry in your communities. You are therefore, expected to report issues of conflict ad violence to the ministry especially when it affects women and children,” Buba said.

She commended Governor Yahaya Bello for putting every machinery in place to forestall peace and security in the state.

According to her, the major objective of the initiative is to prevent violence and promote peaceful coexistence among the people in the society.

She added that it would also address the root causes of conflicts and seek to find a lasting solution to them, and increase women active participation in conflict resolution and peace building.

She noted that the terms of reference for the committees include, raising awareness on ways to prevent and address issues of conflict.

”You will also engage fellow women, youths and children who are perpetrators of violence especially in the coming 2023 general elections.

”You will develop peace building initiative, local action plan on peace, security, and report violence against women and children to the Ministry,” Babatunde said.

In her remarks, Mrs Nafisat Abdulmalik, the Policy and Advocacy Coordinator, said the organisation was collaborating with others to implementing the CIPP project in Nigeria funded by USAID.

According to her, the project is being executed in four communities in four local government areas of each of the six States of Kano, Kastina, Kogi, Kaduna, Benue and Plateau States,

In her goidwil message, the state’s Chairperson, Nigeria Association of Women Journalists (NAWOJ), Mrs Anne Olurinde, commended the Ministry and Mercy Corps-CIPP for the collaboration for all important initiative in ensuring peace in the society.

According to her, peace is sacrosanct to the development of any nation, and it is therefore, important as women being home makers to build peace from home.

Olurinde appreciated the Governor for recognising women and given them notable positions thereby building confidence in them, saying the inauguration of the peace building committees would mark a new beginning of peace in the areas.

The Vice Chairman, Kabba-Bunu LGA, Mrs Bimpe Alfred, urged the women to take advantage of the programme which would ensure peace in the society.

Alfred stressed the need for women to train their children in the ways of the Lord so that they could make them proud in the future while ensuring a peaceful society.

Members of the committees; Hajia Aishat Isa and Florence Allah, described the initiative as a good one, saying it would go a long way to strengthening peace in the society.

Isa, who is the President of Okun Market Women, assured that the committees would put in their best to ensure that the programme achieved the desired results.

Allah, who is the Vice Chairman, Ijumu LGA, said they believed that the project would empower women on how to initiate and maintain peace in the society.