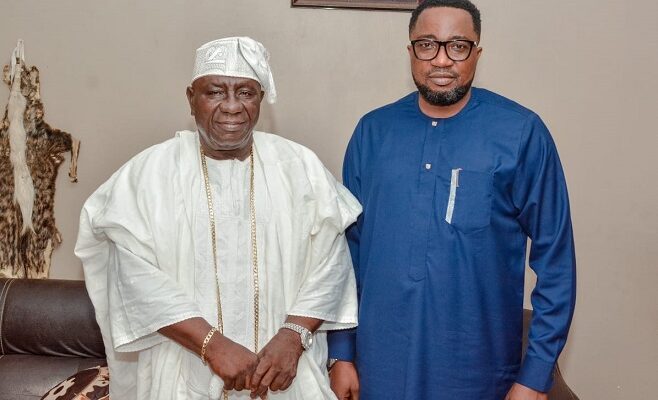 A frontline candidate for the Kogi West Senate seat on the platform of ACCORD (A), Bashorun Moses Deola (MD) Eseyin, FPOP, has solicited for the support and royal blessings of some paramount traditional rulers in the zone towards the 2023 general elections.

Eseyin, a former Special Adviser to the Kogi State Governor, in a consultation visit to the traditional rulers, said he was at their palaces to seek their royal blessings, support and establish a firm rapport with the royal fathers.

The first port of call by the ACCORD Kogi West flag bearer and his entourage, was the Palace of the Obaro of Kabba and Chiarman of Okun Traditional Council, His Royal Majesty, Oba Dele Owoniyi, where the monarch gave them a resounding reception.

Oba Owoniyi described Eseyin as a quintessential youth leader who has always avail himself to be part of human and societal development.

The monarch prayed for the success of his ambition and assured him of his support, saying, ”I have no doubts in your capacity and ability to represent the zone well”.

Eseyin further paid courtesy visit to the palaces of HRM, Oba Julius Joledo the Elulu of Mopa; HRM Oba Alfred Ayedogbon, the Alamuro of Amuro; and the Ajugbonjagun of Orokere. HRH Oba Michael Arogbonlo and their Chiefs in Council respectively.

Eseyin in all the Royal Palaces visited, said his visit was to seek royal blessings, endorsement and prayers for his senatorial ambition, saying his sterling qualities and past experiences in governance and service to humanity would be deployed to get Kogi west working.

”I am youthful and energetic, vibrant and experienced, purposeful, passionate and well equipped with necessary qualities and antecedents to represent the zone to drag down the deserved development,” he said.

The royal fathers in their separate responses, welcome the candidate and his entourage, and offered prayers for him to emerge victorious in the 2023 general elections to represent the zone at the Red Chambers of the National Assembly.

The Elulu of Mopa land, Oba Julius Joledo, commended Eseyin for his courage to embrace the youth audacity to run for Senate in the zone,

The monarch called on the people especially the youth to rally round Eseyin, describing him as an Ambassador of Mopamuro Land, and offered prayers of blessings for him and his entourage.

On his part, the Alamuro of Amuro, Oba Alfred Ayedogbon, also praised and commended Eseyin’s bravery and audacity to jostle for the Senate seat.

According to him, it is a thing of joy to the entire Amuro land being the first person in Amuro land to aspire for the position

He added that Eseyin’s ambition would strengthen the unity in Amuro Land, while encouraging his Chiefs and the people of Amuro to rally round him.

He emphasised that Eseyin’s triumph in the 2023 general elections should be a collective project for Amuro Land.

The Ajugbonjagun of Orokere, HRH Oba Michael Arogbonlo, eulogised the ACCORD flag bearer for his courage and his positive impacts in the Orokere land.

According to him, being the son of the soil and with his quality virtues and impacts in the community over the years, the council will stand solidly behind him and give him all the needed encouragement and support.

”We appreciate your humanitarian attributes and commitments to the development of Kogi State and especially Orokere Community.

”I will not call you a Honorable but Chief who has demonstrated quality leadership exemplifying your chieftaincy title as “The Oluomo of Orokere Kingdom”.

Speaking to journalists at the end of the consultation visit, Eseyin expressed gratitude to all the royal fathers for their warm receptions and encouragements.

He promised to make the people of Kogi west proud, with quality legislative representations if given the opportunity to represent them at the Upper chambers of the National Assembly.

”I am a youth and I have done it before while I was the Special Adviser to the Governor on Youth Sports, and Students’ Affairs, and we promise to do better.

”I believe by the time I am elected by the grace of God come 2023, I will ensure a better legislative representation for the betterment of the people of Kogi west”, Eseyin said.