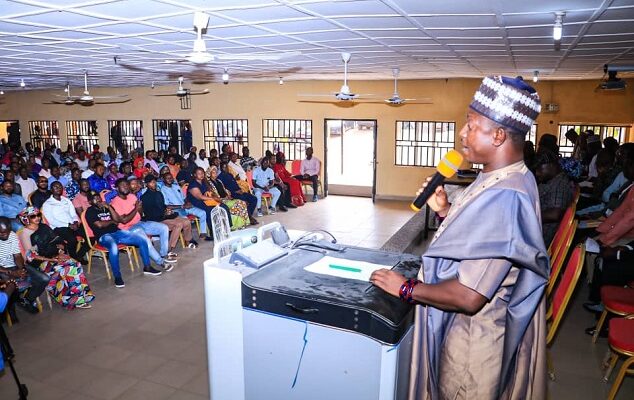 The Rector of Kogi State Polytechnic, Lokoja, Dr. Salisu Ogbo Usman, has charged the newly recruited staff of the institution to respect ethics and values of the institution and always be of good conduct in a bid to raise qualities the citadel of learning is known for.

The Rector gave the charge at an interactive session with the newly recruited officers of the institution in Lokoja on Wednesday.

Dr. Usman congratulated the newly recruited officers and lecturers of the institution on the opportunity to be part of the Kogi State civil service in the face of skyrocketing unemployment rate in the country.

He unreservedly appreciated the unusual magnanimity of Governor Yahaya Adoza Bello for always having the interest of the state at heart by giving employment opportunities to graduates as well as prioritizing human capital development within and outside Kogi State.

The Rector revealed that staff members’ welfare remained paramount in his transformative agenda of moving the Polytechnic forward, adding that the newly recruited officers were expected to key into the vision and goals of the Polytechnic in ensuring that the institution experience a change of status quo from the old order.

Dr. Usman warned the new members of staff to live up to expectations by shunning lateness to work, avoid sharp practices (extortions), and laxity at work.

He disclosed part of his transformative agenda which include continuous training of staff, just as he encouraged members of staff on the need to be ICT inclined, punctual and be dedicated to their assigned responsibilities as a way of taking the Polytechnic to its desired level.

“It’s not going to be business as usual, the Polytechnic should be seen as self-sustaining and as such should be taken seriously by all members of staff.

“No doubt, the fortunes of this Polytechnic will change for good if we all decide to be dedicated, productive and efficiently committed to serving the purpose for which we are engaged,” he assured.

He further urged respective authorities including the Deans, Directors and Heads of Departments to provide mentorship to the new officers in the quest to achieve the lofty plans and dreams of the institution.

The Registrar, Elder Sunday Aiyeetan in his opening remark described Dr. Usman as a workaholic Rector with proven integrity and competence as he advised the newly recruited staff members to key into the transformation agenda of the management of the institution.

They equally charged the new officers to be of good behaviour, be disciplined and display positive character whilst discharging their responsibilities without cutting corners.

There were commendations to the Governor of Kogi State and the Rector by some of the new staff who spoke on behalf of others, and with a promise to live up to confidence reposed in them with the appointment.

Present at the meeting were other principal officers and management members of the Polytechnic, among others.