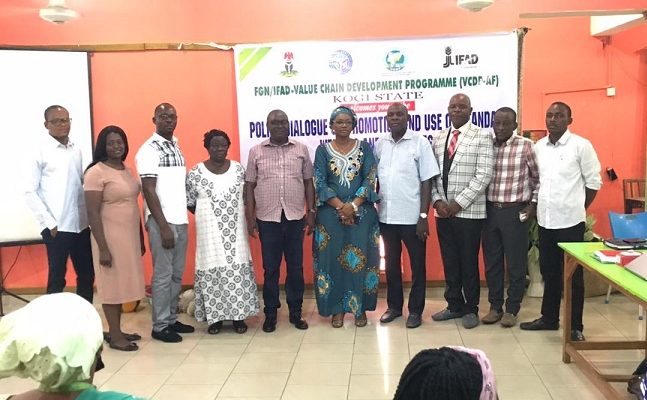 In an apparent bid to make stakeholders abreast with the latest practices in standard weight and measures, the Kogi State VCDP conveyed a sensitisation meeting to dialogue with stakeholders comprising producers, processors, marketers, off-takers, Local Government liaison officers and extension officers and others.

The meeting which was held in Lokoja had in attendance the following dignitaries : the Kogi Commissioner for Agricultural, Mr David Apeh; the Managing Director of Kogi Agricultural Development Project (ADP), Mr George Ogirima, the State Program Coordinator Dr Stella Adejoh, the State Coordinator of NAFDAC, Chairman Cassava Growers Association of Nigeria, among several others.

The theme for the programme is ”Policy Dialogue On Promotion And Use Of Standard Weights And Measures”.

In her opening remarks, the State Programme Coordinator of Kogi IFAD/VCDP, Dr Stella Adejoh, expressed satisfaction with the presence of all the relevant stakeholders for the sensitisation meeting.

She noted that the essence of the sensitisation dialogue was to seek a holistic approach in addressing the constraints along the cassava and rice value chain.

She added that the interest of farmers are topmost in her heart, and one of the ways their interest can be protected is through standard weight and measures.

She stressed that at the moment the farmers and buyers are not protected because no standard way of measurement due to sharp practices along the value chain.

She appreciated the efforts of the State Government in supporting the programme at all levels, adding that it is only God fearing and people oriented government that could do what His Excellency, Alhaji Yahaya Bello is doing in the state.

According to her, VCDP is a commercially oriented market-led, demand-driven project. It is designed to respond to market needs of end-users of rice and cassava commodities.

She explained that the goal of the programme was to reduce rural poverty, increase food security and accelerate economic growth on a sustainable basis.

The program coordinator added that the roundtable policy dialogue would be an opportunity for stakeholders to share experiences and insights on the promotion and use of standard weights and measures.

She stressed that Weights and Measures would enable the buyers and sellers to quantify and ascertain the value of products which had become an important part of the value chain on a daily basis.

”Improvement of quality norms and standardization of farm produce will influence market regulatory systems of the government policy on standard, including uniformity of weighing equipment and products.

”All these can be achieved through the promotion, continues sensitization, demonstration and use of standard weight and measure which we are starting today.

Speaking, the State Commissioner for Agriculture, Hon. David Apeh, appreciated the efforts of the state programme Coordinator and her team, stating that the current Administration under the leadership of His Excellency, Alhaji Yahaya Bello, has zero tolerance for hunger and poverty.

The commissioner who was represented by Mr Ameh assured the continuous support of the governor for the program while appealing to the managers of the program and stakeholders to continue on the selfless service rendered so far.

In the same vein, the Managing Director of Kogi ADP, Mr George Ogirima, expressed joy towards the exploits of the Kogi VCDP, noting that the Programme Coordinator’s managerial acumen is at the same frequency with that of men.

The MD equally thanked the governor for creating the enabling environment for the programme to thrive in the state.

He advised participants to adhere strictly to the guidelines and mode of operations as spelt out in the technical session.

In another development, the Chairman, Cassava Growers Association of Nigeria, Mr Agada Paul, stated that the Agro business is the main stay of the Nigeria economy now, due to the benefits available in Agricultural practice.

According to him, for instance in cassava as mentioned during the meeting, several pharmaceutical products are produced using cassava, food recipe like Maggi, bread, ethanol, among others. He noted a scenario where a cup of garri is been sold currently between 70 and 80 a tin which is a pointer for all to return to farm.