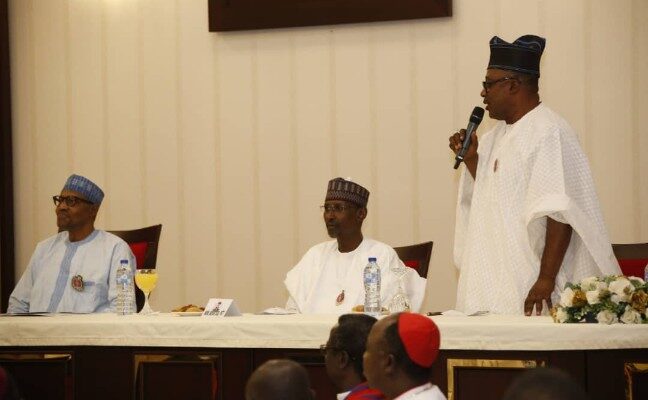 Minister for the Federal Capital Territory, Alhaji Mohamed Bello has appealed to President Muhammadu Buhari to allow the ruling party field Senator Smart Adeyemi as the flag bearer of the party for the November 11 governorship election in Kogi state.

He said Adeyemi is a man of diligence and impeccable character with a zest for selfless service.

The Minister, who led a delegation of Christians and Muslims leaders including FCT stakeholders to the Aso Villa to felicitate with the president on Christmas day, said Senator Adeyemi having served as a three term Senator has the requisite experience, capabilities and acceptability to make the APC win the governorship election.

The Minister who described Senator Smart Adeyemi as a very patriotic party faithful who has contributed so much for the growth of the party praised President Buhari for allowing power to shift to the South preceding the completion of his tenure by May 2023 and urged the president to allow the same thing to happen in Kogi State.

The Minister recalled that since the creation of Kogi state 32 years ago, the Eastern senatorial district of the state has produced three governors at various times which spanned for 24 years and the central axis of the state also produced a governor who will be completing his two term tenure of 8 years while the western senatorial district where Adeyemi hails from has never produced any governor.

He said Adeyemi who is the current senate committee chairman on FCT has served in that capacity for two terms and has been one of the brains behind the development of the federal capital territory and described him as a honest politician and a team player, that if given the opportunity, he is well loved by his people and well acceptable to all the segments of the state.

In his speech on the occasion, Senator Smart Adeyemi commended president Muhammadu Buhari for being a father to all Nigerians irrespective of tribe and religion and stressed that his administration in the last seven years has made some drastic transformations in some areas of our national life.

He specifically commended the president for the peaceful conduct of the APC presidential primary elections which brought Asiwaju Ahmed Bola Tinubu and Shettima Kashim and described them as the best team that will govern Nigeria due to their track records of service and personal integrity.

He also commended the Northern governors for conceding power to the southern states to produce the candidate of APC for the presidential election and said for fairness, equity and justice the same thing should be done for kogi west to produce the next governor which has not produced a governor since the creation of the state over 32 years ago.

Responding, President Muhammadu Buhari thanked the delegation for the honour accorded him and promised to leave a lasting legacy even as he specifically praised the FCT Minister, Mohammed Bello and Senator Smart Adeyemi for their diligence and patriotism to the service of the nation.