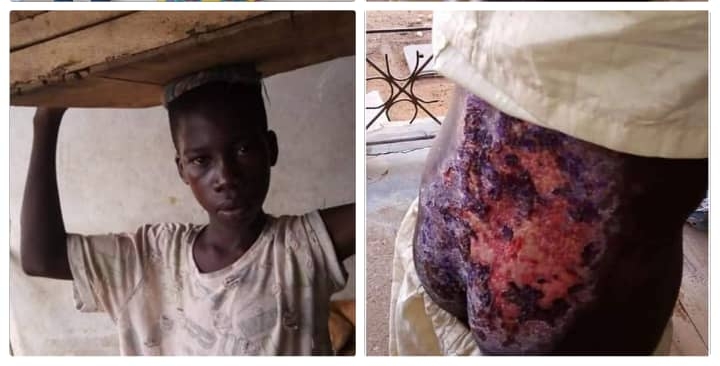 Kogi State Government says the alleged assault of a 15 year old boy in Egbe, Yagba West Local Government Area by his guardian will not be swept under the carpet.

The Senior Special Assistant to the Governor on Women and Children Development, Mrs. Omotayo Adeleye Ishaya made this known during a visit to Egbe on a fact finding mission.

One Aaron Fikayomi had in her Facebook page on Saturday 10th March, 2021, said the 12-year old  boy sustained serious injuries inflicted on him by a couple suspected to be the his guardians.

Mrs. Adeleye Ishaya noted that upon receiving the report, she swung into action to get first hand information about the incident.

“The boy, Gbenga Oreniwon is a primary four pupil of Salvation Primary School, Egbe who according to the school headmistress has not come to school since the beginning but sells locust beans for his guardian.”

She said the boy fell into a hot ash when the husband of his guardian was pushing him after the sales of the locust beans was missing.

“the boy was said to have fell into the ash with his lower abdomen which made him to sustain serious injury.”

Ishaya who condemned the act, said government will take up the matter with the view of ensuring that the perpetrators face the full weight of the law.