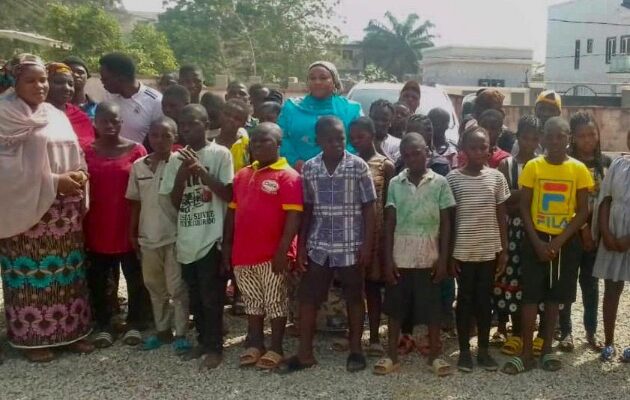 The Kogi State Government has repatriated 34 trafficked Children back to Plateau State.

The State Commissioner for Women Affairs and Social Development, Hajia Fatima Kabir Buba disclosed this on Sunday during a press briefing in Lokoja.

It could be recalled that, the National Drug Law Enforcement Agency (NDLEA) on 16th December, 2021 along the Okene-Lokoja Expressway intercepted two commercial buses – Toyota Sienna and a 12- seater Mazda with registration numbers Lagos LND124FV and Oyo BDJ-683YK respectively conveying minors from Ogun to Plateau State by a human trafficking syndicate.

The bus drivers during interrogation confirmed that the kids were handed over to them by a woman at Ijebu-Ode, known as Mama Blessing AKA ( Martina)to be conveyed to Abuja, adding that, on arrival in the FCT, the Woman is to call another bus driver who will convey the children to Riyom in Plateau State.

Speaking to journalists, the Commissioner for Women Affairs and Social Development said the repatriated Children are within the age of nine to 19 years respectively.

Continuing, Buba said, “After several interview and investigations by the Ministry of Women Affairs and Social Development in Kogi State, we are meant to understand that all the trafficked children are from Plateau State. The issue is still under investigation and the children were repatriated to their state (Plateau) and handed over to their Ministry of Women Affairs to reunite with their parents.

“It is important to State here gentle men of the press that Kogi State Government under our amiable Governor Alhaji Yahaya Bello will continue to protect Children and ensure that criminals have no breeding place in our State. Our administration will follow this incident to a logical conclusion and ensure that those behind this evil act is brought to book.”

According to her, Kogi government has already written to the Ministry of Women Affairs in Ogun State to track down the said woman, adding that, the Director Operations, National Agency for Prohibition of Trafficking in Persons (NAPTIP), Mr Daniel Atokolo, is making serious investigations to track down all the syndicates involved in the illegal business.