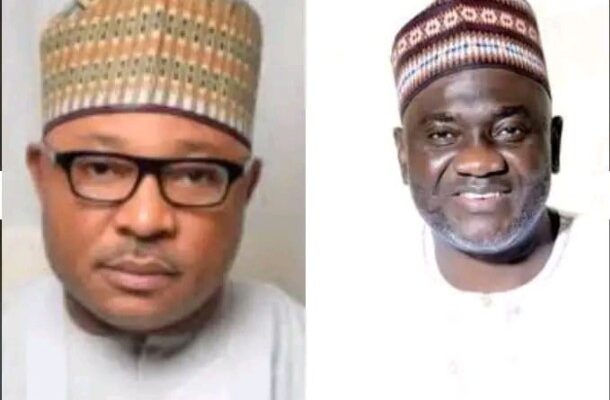 A concerned group in Kogi East senatorial district has written to the candidate of the Peoples Democratic Party (PDP) Dr. Victor Alewo Adoji, itemizing the achievements of the incumbent senator representing the district, Senator Jibrin Isah Echocho with reasons why he deserves a second term in the national assembly.

In a letter title ‘Victor Alewo Adoji: When Silence is No Longer Golden’, the concerned APC group berated the PDP candidate and his cohort for their relentless attempt to denigrate Senator Echocho.

The letter signed by Hassan Amodu, on behalf of the group, read in part:

“We have watched with dismay the persistent publications by Dr. Victor Alewo Adoji and his cohorts on the social media, aimed at discrediting Senator Isah Jibrin (Echocho), despite Echocho’s overwhelming performance at the Red Chamber, which is obvious to all, including the deaf, the dumb, and the blind.

“Echocho has set a pace in representation at the Red Chamber.

“Echocho has sponsored milestone bills and motions, some specific to Kogi East Senatorial District, and others to address key national issues.

“Echocho has established agro-allied factories, including palm oil production plant, rice milling plant, cashew processing plant, and cassava processing plant, at various local government areas in Kogi East. This is aimed at adding values to some of the agricultural produce, instead of selling them in raw forms, thereby creating employment opportunities for, in particular, our youths and women.

“To complement this, Echocho has facilitated distribution of tractors and various farming equipments to all the nine local government areas in Kogi East.

“Echocho has facilitated construction of some feeder roads to ease transportation of farm produce to the end markets.

“Echocho has provided electricity transformers to some needy communities in Kogi East. He has facilitated construction of blocks of classrooms in some schools in Kogi East.

“To complement this, Echocho has facilitated supply of various educational materials (textbooks, notebooks, etcetera), to various schools in Kogi East.

“Echocho has facilitated provision of solar lights to various communities, including some churches and mosques in Kogi East.

“Echocho has facilitated various training programmes, with start-up capitals for the beneficiaries across the nine local government areas in Kogi East. Some of those trained also benefited in kind, in particular, provision of sewing machines, grinding machines, and telephone repair kits.

“Echocho’s other achievements include facilitation of employment opportunities, and many others too numerous to mention.

“Unfortunately, Victor Adoji and his co-dreamers continue to pretend that they are unaware of the above milestone achievements of a first-timer in the Senate and in about 3½ years.”

The group urged Adoji to concentrate on his campaign, by informing the electorate about his antecedents in terms of service to Igala/Bassa kingdom.

“Let him inform the electorate on his plans for Kogi East (which he has not been able to articulate), all he does is to use the social media to attack Senator Isah Jibrin (Echocho), with frivolous and unfounded allegations.

“Since this is Victor’s strategy, we want to state here emphatically that he has failed woefully, as Echocho’s records of achievements, which are still counting are already speaking for him.”

Spread the love
Tweet
Previous Post2023: Ajaokuta Steel Should be Your Top Priority When You Emerge President, Natasha Appeals to Atiku Next PostUk’Omu Igala Urge Kogi Govt to Rethink Query Issued to Ohinoyi of Ebiraland