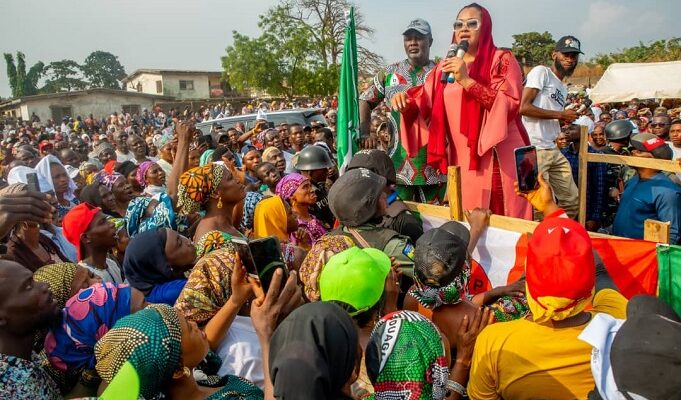 Ahead of the February 25, 2023 general elections, the senatorial candidate of the Peoples Democratic Party (PDP) in Kogi Central, Barr. Natasha Akpoti-Uduaghan, has promised to be the voice of her people and speak for them when she gets to the red chamber of the 10th National Assembly.

She stated this on Sunday when her campaign train berthed at Okene local government area in continuation of her Ward-to-Ward campaign.

Natasha noted that the people of Kogi Central senatorial district have suffered for too long and charged the people to express their pains through the ballot on February 25, 2023.

“We’ve suffered for too long, and we’ve been in darkness for too long, we can’t continue like this. I and every other PDP candidate are here to serve you and ensure this suffering and pains are over.

“We have a simple message of hope and possibility to share, we are all connected to your suffering and pains.

“When you send me to the Senate, I will be the most vibrant senator, I will ensure I fight for everything that concerns you.

“I am aware our women are entangled with Lapo loan, I will ensure I fight for soft loans for you to improve your businesses.

“I will fight to ensure Ajaokuta is revived so that we will have jobs and our state will become the commercial hub of the North like it was in the 70s, we will fight to bring back the lost glory of Ebiraland”, she said.

The campaign train of the PDP senatorial candidate first stopped at Okene I and subsequently proceeded to Okene II where thousands of residents trooped out to welcome her and reiterated their resolve to vote for her.

Party stalwarts, others candidates of the party and community stakeholders were in attendance to welcome the PDP senatorial candidate to Okene local government area.

Speaking on the need to support the candidature of Barr. Natasha Akpoti-Uduaghan, the former Chairman of Okene local government, Alhaji Yahaya Karaku, said the PDP senatorial candidate has distinguished herself as a worthy daughter of Ebiraland who deserves to be supported.

He disclosed that he decided to dump APC and defected to PDP because he wanted to be in a party where he will have a stake, and support Barr. Natasha Akpoti-Uduaghan to actualize her vision for the good people of Ebiraland.

He called on the people of Ebiraland to embrace peace irrespective of party affiliations, adding that all the candidates are of the same blood and political differences should not cause enmity.