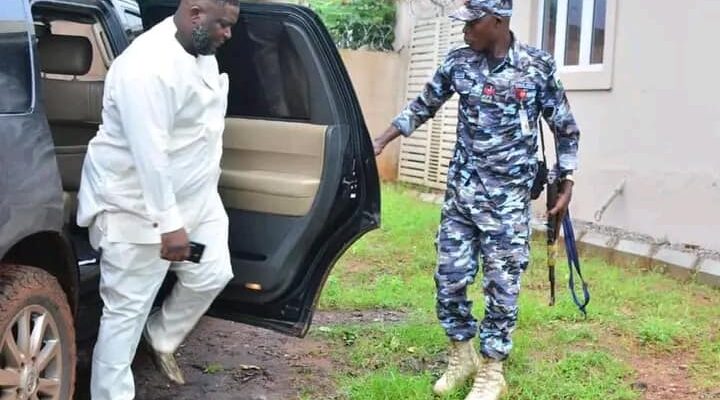 Armed hoodlums allegedly sponsored by the ruling All Progressives Congress (APC) have been accused of attacking supporters of the House of Representatives candidate of Labour Party (LP) for Ankpa, Omala and Olamaboro Federal Constituency, Chief Peter Ojonugwa Ameh.

Ojonugwa made this known in a statement made available to newsmen on Sunday.

He alleged that thugs led one Mr Arome Abuh (Basito) on Friday morning attacked his loyalists and campaign billboards in Ibana, Ikeje and other areas in the local government area.

“We were jolted out of sleep on the night of 12th November, 2022 with a cry for help by members of the Labour Party and my supporters (High Chief Peter Ojonugwa Ameh), the Labour Party candidate for the Ankpa, Omala and Olamaboro Federal Constituency seat of the House of Representatives over attacks on their persons and billboards of the party’s candidates in Ibana, Ikeje and Okpo, and other locations across Olamaboro Local Government Area as led by Mr Basito Abuh and Old School and other APC thugs from Ogugu.

“I am not contesting for Governor or Deputy so I wonder why an Ogugu son will be leading an attack on another bonafide Ogugu son. We have eyewitnesses.

“They both claimed during the attack that it was authorised by Chief Edward David Onoja, the Deputy Governor of Kogi State, Mr Joshua Onoja, the state APC Secretary and other APC leaders in the local government came to us as a huge surprise as we were given the intelligence of the demonic plans within the past few days and we had taken all measures including mounting of guards by party loyalists and supporters around our billboards in the various locations across the local government area,” he said.

He alleged that “thugs who were visibly identified to have been led by Basito Abuh stormed these locations at about 11.00 PM armed with arms and ammunition, threatening to shoot my supporters who had to scamper for safety”.

He further alleged that the assailants “descended on the billboards and posters of Chief Peter Ojonugwa Ameh, destroying same before proceeding to the Igah Ikeje, Okpo and other strategic locations across the Area Council to perpetuate the same act”.

“This vista in our political history is worrisome more because the leaders of the attackers were supposed leaders of a vigilante group put in place by the collective efforts of all Ogugu sons and daughters and weapons purchased by the sweat of our collective contributions on this platform. That the same structure put in place by the people and the guns provided for the protection of the people will be deployed against the candidature of an Ogugu very illustrious son who contributed hugely to the building of the said security structure leaves much to be desired.

“The attack is also one too many as it is targeted at the Labour Party and its candidates solely leaving the billboards of the APC, NNPP, PDP and others untouched but went all out against those of the Labour Party in a scale hugely unfathomable.

“Our leadership is distressed over this development as it actually made frantic efforts through the Personal Assistant to the Deputy Governor, Chief Ojonugwa Victor Abogede to intimate the ruling party of its knowledge of the planned attack and pleaded for their intervention to stop same, unfortunately, nothing was done in this respect.

“We wish to add that this ugly development is a new adverse chapter in the political history of Ogugu people who have right from the first republic through the years demonstrated a high degree of political sophistication, plurality and maturity often giving preference to individual candidates, their personality, character and antecedents over party affiliation.

“We condemn the attack in its entirety and call on the security agencies to arrest Mr Basito Abuh and Old School alongside their other accomplices and bring them to book. As a party, we will be on the trail of these attackers and ensure that justice is done.

“May we enjoin our supporters and loyalists to remain calm, peaceful and law-abiding, while keeping faith with our well-espoused principles of civilised politics and robust engagement with the people?”

“I will not be threatened to abandon my ambition to represent the good people of Ankpa Federal Constituency and if anything happens to me, please the above-named persons should be held responsible because about 5 Ogugu sons have been killed since we set up this security outfit through extra-judicial killings,” he added.