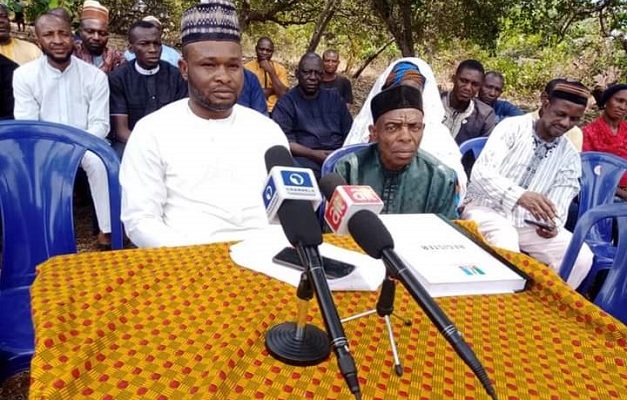 The All Progressives Congress (APC), Ofu local government of Kogi state branch, has de-registered one of its chieftains, Dr. Yakubu Ugwolawo with immediate effect over his persistent involvement in anti-party activities.

Speaking with Journalists at the Ukpolochi polling unit 006 Ugwolawo, headquarters of Ofu local government area, on Thursday, the Chairman of Ukpolochi, Hon Shaibu Abalaka stressed that the decision to suspend Dr Ugwolawo became imperative as he has little or no respect for the party thereby making uncomplimentary statements about the person of the governor, Alhaji Yahaya Bello.

He stated that Ugwolawo’s smear campaign against institution and political leaders is legendary, pointing out that the conducive political environment that the people of Ugwolawo are enjoying today under Governor Yahaya Bello cannot be allowed to be distorted by the antics of one person with very negligible political value.

The ward chairman of Ukpolochi unit 006, flanked by his entire executive members while speaking with our reporter,  said Dr Yakubu Ugwolawo has been warned several times to desist from anti party practices to no avail leaving no other options than to delete his name from the party’s register.

The local government chairman of APC in Ofu LGA, Hon Yahaya Shagari, while commenting on Dr Yakubu Ugwolawo’s anti-party activities, reiterated that as a formidable party in Kogi State preparing to produce a youthful governor, a single person cannot turn back the hand of the clock.

It would be recalled that Dr Yakubu Ugwolawo at a press briefing described Governor Bello as a liability to APC.

In a press statement addressed by the leader of the concerned group APC members, Dr. Yakubu Haruna Ugwolawo, with APC revalidation number: KG/KFU/14/08832, and made available to journalists in Lokoja on Tuesday, the group described Governor Bello’s recent activities on the pretext of contesting for the presidency as “reckless and insensitive”.

The group said Bello’s new found friends, platform and his recent utterances in his bid to prosecute his presidential ambition were detrimental to the ruling party.

“The governor has put no one in doubt about his treacherous behaviour and betrayal tendency. Today, as can be seen as a result of his desperate and ill-advised presidential ambition, he has abandoned his benefactor, the number one leader of our party, President Muhammadu Buhari, by courting and associating with Baba’s sworn enemies and opponents,” he was quoted to have said.

Explaining, Dr Ugwolawo who was Bello’s campaign Director General during his quest to contest the party primary election for the state governorship election in 2015  added that Governor Bello has openly shifted his allegiance to the sworn enemies of President Buhari and the APC, in an attempt to achieve his perceived 2023 presidential ambition.

Chairman of Ofu Local Government Council, Hon. Ibrahim Amodu who expressed disappointment at the behavior of Dr. Ugwolawo, noted that he is standing alone in his act of disloyalty and disrespect for constituted authority.

He reaffirmed the party’s commitment to supporting Yahaya Bello, noting that Bello remains one of the most loyal and impactful leaders in the APC.

In his words: “The uncomplimentary statements made by Yakubu Haruna and his faceless none existing concerned group, calling for the suspension of the leader of our party Yahaya Bello for what he called anti party activity is not only childish, but disrespectful, unpatriotic, condemnable and laughable”.

Amodu added that the statement does not represent the stands of the party, but a statement made from a dreamer who is having an endless sleep and speaking out of illusion.

The council chairman who said he stands with the party for delisting Ugwolawo from the party said, the party has  ignored Ugwolawo for long but said his delisting will serve as lesson to others.

he reaffirmed the fact Yahaya Bello enjoys a very strong and cordial relationship with the President Muhammadu Buhari and cannot be seen or accused of working against his interest.
He restated his commitment to see that Bello receive full support ahead of 2023 at the local Government, noting that, th actualization of the GYB to PYB project will be supported to the full