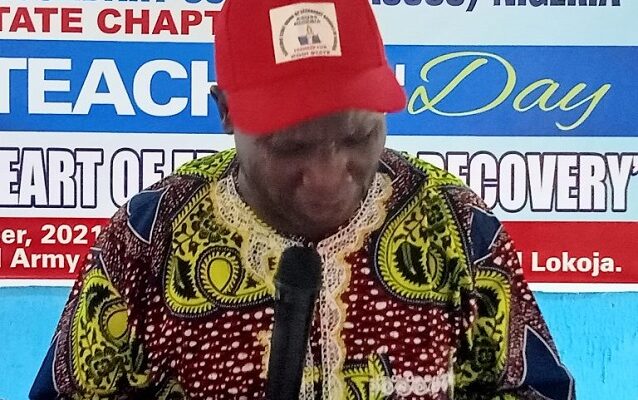 The Academic Staff Union Of Secondary Schools (ASUSS) has lamented over the shortage of teachers in Kogi state.

The state ASUSS Chairman, Comrade Ranti Ojo, who spoke on the sideline of the 2021 International Teachers Day (ITD) in Lokoja on Tuesday, said the union is pained and disillusioned over the precarious circumstance they found themselves.

Ojo explained that the problem of shortage of teachers has attained a pandemic status as a result of the fallouts of the various screening exercise conducted by the Governor Yahaya Bello led administration which led to the exit of teachers from classrooms due to massive compulsory retirement inflicted on them.

Continuing, Ojo said “we will be failing ourselves as a union, failing our beloved students in particular and the society in general, if we shy away from presenting the challenge of abysmal shortage of teachers in our schools as it is. For more than a decade ago, our union has been decrying the colossal shortage of teachers in our secondary schools.

“For record purpose, the recruitment of teachers in the secondary school sector by the administration of Governor Ibrahim Idris 2003-2012 for STTEB was 1500 science teachers in 2009 and for TSC was in 2005. Similarly, during the wee days of Governor Idris Wada’s administration in 2015, he employed 500 hundred teachers which the present administration failed to recognize and eventually expunged from the payroll, despite all the appeal made by our union.

“It was in this regard that we applauded and commended the initiative of His Excellency, the Executive Governor of the State in approving the recruitment of 3700 teachers shortly before the Kogi State Governorship election in November 2019.

“But as it stands today, the recruitment exercise has not seen the light of the day since His Excellency won his election. We are therefore pained and disillusioned, and are using this occasion to passionately appeal to His Excellency to direct the STETSCOM to reactivate the process of recruitment of the approved 3700 teachers and more.

“If Kogi State must actually return to her pride of place in the Northern Nigeria educationally, recruitment of more teachers is critical and urgent.”

“The immediate implementation of the new minimum wage of N30,000 in Kogi State is not only justifiable but also expedient. To worsen the predicaments of Kogi workers, we contend with the non implementation of promotions and annual increment for many years at the state and local government levels; the non-implementation of subsisting arrangement of payment of Leave Bonus with priority attention to Teaching Service Commission (TSC) on their outstanding 2013 leave bonus as contained in the agreement of January, 2016; all these and other array of challenges are mitigating against the high productivity of teachers in the state and have continued to erode the dignity of Kogi teachers.

“A trip to many of our schools, especially those in the rural areas, will present an awful sight of the state of infrastructure that have remained dilapidated over many years. We cannot but paint the gloomy picture of over 90% of our schools, where laboratories are nonexistent, libraries are without books and where there are books, the books are out of date. Instructional materials are no longer known as part of school’s necessities and sports and extracurricular activities have for long been forgotten as part of schools’ routine,” he added.

It could be recalled that, the World Teachers Day is held annually on 5th October since 1994 to mark the anniversary of the adoption of the 1966 ILO/UNESCO recommendation concerning the status of teachers.

This recommendation sets benchmarks as regards the rights and responsibilities of teachers and standards for their initial preparation and further education, recruitment, employment, and teaching and learning conditions.

The theme for this year’s World Teachers‟ Day celebration as presented by the United Nations (UNESCO) is ‘Teachers at the Heart of Education Recovery’.