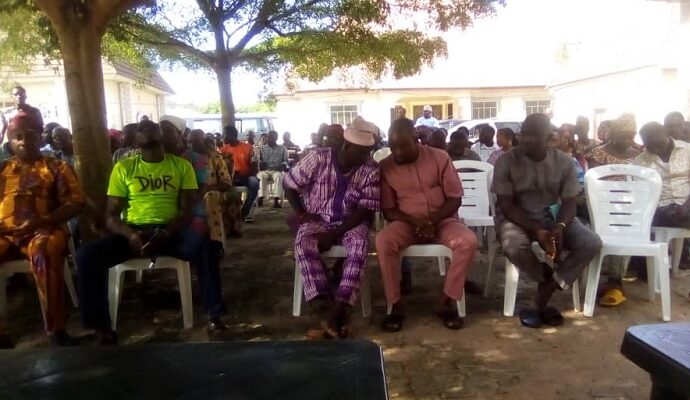 Leaders of the Peoples Democratic Party (PDP) in Ijumu local government area of Kogi state have rejected the purported imposition of Samuel Olorunmaiye as chairman of the party.

PDP leaders comprising of the 15 wards executives, local government executives, party chieftains and stakeholders from Ijumu LGA during a meeting on Friday at Egbeda-Egga to review the outcome of the recently concluded congress of the party held on the 5th of October 2021.

The meeting is coming on the heels of petition sent to the state chairman of the party by Ijumu Arin PDP alleging that Olorunmaiye, who was allegedly imposed by Senator Dino Melaye, is not a member of PDP, adding that his name is not in Iyara Ward PDP membership register.

The petition signed by Hon. S. K. Adekunle submitted that Olorunmaiye is a member of All Progressives Congress (APC) and worked as Iyara coordinator for AVM Jibrin Isah during the 2019 APC governorship primary election in Kogi state.

The communique issued at the end of the meeting rejected the “subversive acts and usurpation of the will and wishes of Ijumu people evidenced by the imposition of one Samuel Olabode Olorunmaiye by Senator Dino Melaiye and his cohorts for the office of the PDP Chairman, Ijumu Local Government Area.”

“The meeting viewed the usurpation of Dino Melaye as contemptuous and deliberate ploy to divide the party in the Local Government and place it on a war path in his usual characteristics.

“The meeting resolved to follow due process and strict adherence to party guidelines in electing all officers of the party with transparency and honesty as watch word in all elections of the party.

“The meeting further resolved to warn Dino Melaye and his co-travellers to allow peace to reign in Ijumu PDP and that his evil intentions shall be resisted by every legal means available within the party and the laws of the land.”

The party leaders resolved not to be intimidated by any individual, no matter how highly placed in the scheme of things.