Home News ‘I Inherited a State That Was Law-less’, Says Kogi Governor as He Signs Four Bills Into Law 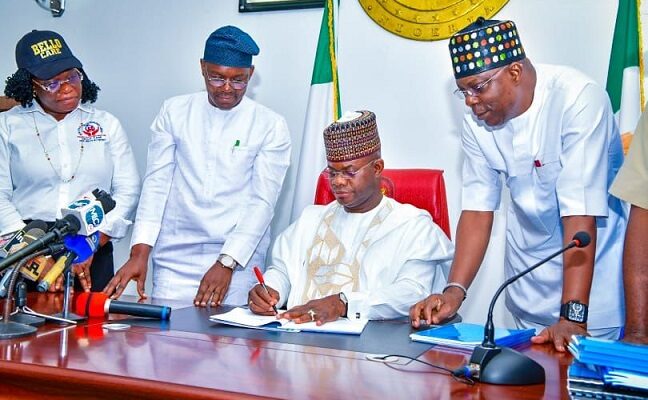 ‘I Inherited a State That Was Law-less’, Says Kogi Governor as He Signs Four Bills Into Law

… urged the State Assembly to identify unimplemented laws for M&E

Kogi State Governor, Yahaya Bello on Tuesday signed into law four bills while he assured that all laws made were citizen friendly and aimed at making Kogi great.

The governor urged the State Assembly to identify all the laws previously passed and signed but unimplemented by the various Ministries, Agencies or parastatals so as to engage in joint monitoring and evaluation

The governor he stressed that his administration inherited a state that was lawless but has witnessed tremendous improvement adding that the 7th assembly had performed efficiently.

He asked that the legislative arm should continue to work in synergy with the other arms of government as that was a standard disposition of his administration.

He further called on all citizens, business owners and those earning their living in the state to comply with the laws stating that the newly signed laws would facilitate a clean environment and an increase in revenue generation.

In his address, the Speaker of the State House of Assembly, RT. Hon Matthew Kolawole assured that they as an arm of government were committed to the development of the state and improvement of revenue generation.

He conveyed to the governor that the State Assembly was investigating certain companies who have been short changing the state government and they would transmit their resolution in no distant time.