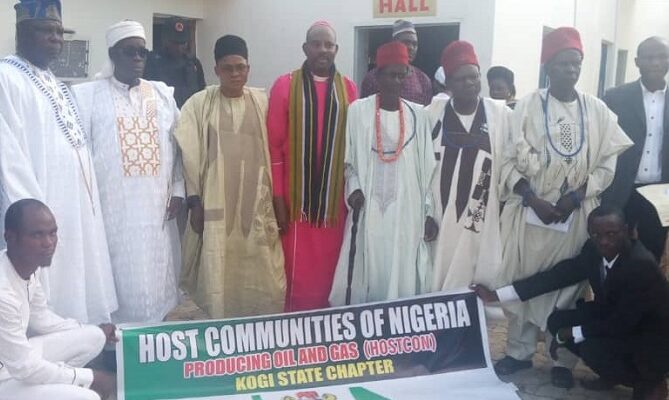 The Host Communities of Nigeria Producing Oil and Gas (HOSTCON), Kogi chapter, has commended Governor Yahaya Bello over the declaration of Kogi as an oil producing state by the Federal Government.

The HOSTCON’s Chairman, His Eminence, Bishop Gabriel Ojoka, made the commendation at the inauguration and certification of Traditional Council Wing of the association in Lokoja.

Ojoka, who doubles as Chairman Northern States’ Area of HOSTCON, appreciated the governor for his commitment and effort which had led to the realisation of the prolonged agitation.

“To our leader and dogged State Governor, Alhaji Yahaya Bello, we say thank you, we have passed vote of confidence on you.

“We believe that in this your time before 2023, Kogi will become another London in Nigeria,” he said.

Ojoka also commended President Muhammadu Buhari for taking a good position, saying the pronouncement of Kogi as oil producing state, has given them a relief.

He noted that inauguration of the traditional council was to establish the executive members for the work and service delivery to Kogi people in line with program, structure and organ of the organisation.

He charged the state traditional council to wake up for the responsibility of hard work, having in mind that bringing anything good to Kogi amounts to a lot of contention.

According to him, since 2016, we have been on this struggle advocating for the declaration of Kogi State as oil producing because we are very sure that there is oil in Ibaji though we have had a contention with Anambra State for a very long time.

“We can now look up for development, diversification from oil to gas and agriculture. God is on our side, and we are saying big congratulations to Kogi people.

“Now that oil has come we believe with the power and input of our governor, job is coming for the youths; very soon we will go into pipeline security surveillance recruitment,” he said.

Ojoka stressed that oil and gas remained a national issues and not dealing with a particular community, saying the 13 per cent derivative would be used to develop every area of the three senatorial zones.

The Ohiogba of Mozum, Alh. Khalid Ali, who spoke on behalf of the traditional rulers, said it was a day long expected to be achieved, and thanked the Governor and His Eminence for making it a reality.

“It is a relief to us in Kogi State. We thank God that Gov. Yahaya Bello has the luck of always making Kogi to succeed, we pray that God will prosper and strengthen him, and all other stakeholders in the struggle.

“Our Governor is a very lucky governor and I pray that such luck would continue to follow him and the people of Kogi State.”

The highlight of the occasion was the presentation of letters and certificates of membership to the traditional council wing of HOSTCON.