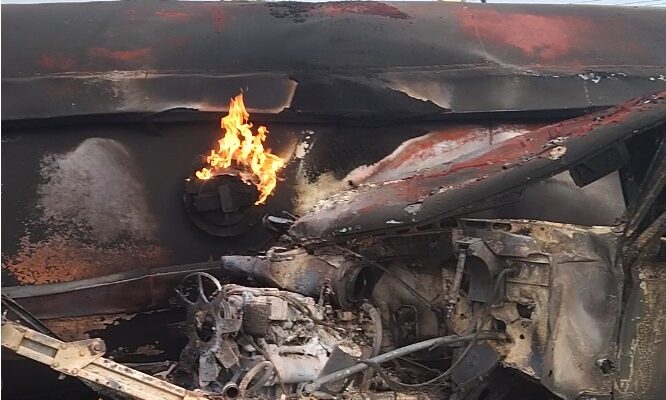 No less than three persons have died following a tanker fire accident in Felele, along Lokoja-Abuja road in Kogi state.

The accident, a recurring incident in Felele, occurred on Monday night when a fuel laden tanker rammed into an articulated vehicle carrying textile materials and other vehicles.

FRSC also confirmed that the tanker was carrying diesel, adding that many persons were injured in the inferno.

He said that the fuel tanker fully loaded with diesel busted into flames when it crashed into other vehicles parked beside the road.

“The fire of the crashed tanker resulted to the burning of two other articulated vehicles and a Dyna Pick-up van on the road.

“Three persons were burnt to death while two other victims were rescued with burns and rushed to the Federal Medical Centre, Lokoja for medical attention and the corpses deposited at the mortuary.

“Unfortunately, the Dyna Pick-up van that was parked by the road side and two other vehicles were affected by the fire.

“At that point, traffic became standstill due to the magnitude of the fire until it subsided, making operatives of FRSC to conduct traffic control and cleared the hold-up,” he said.

He said FRSC has commenced full investigation into the accident.