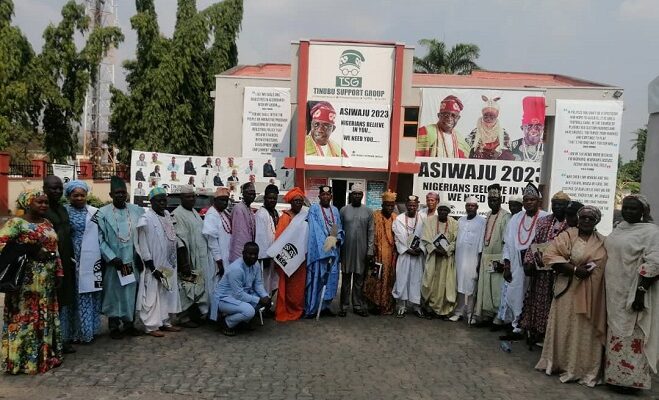 The Abuja chapter of Yoruba Council of Obas has thrown its weight behind the presidential aspiration of Bola Tinubu, national leader of the All Progressives Congress (APC).

The monarchs noted that Tinubu was the best presidential material in 2023.

Oba Olusegun Salau, the Oba of Yoruba FCT and the Chairman Yoruba traditional council, FCT chapter, who led other top Yoruba FCT Monarchs to Tinubu Support Group campaign office in Abuja on Sunday, said the managerial skill, technical know-how, and national appeal of Tinubu put him in the best position to rule Nigeria in 2023.

They said the group would mobilize other yoruba Obas in northern Nigeria to ensure that the former Governor becomes President in 2023.

“We are praying for Jagaban for long life and we are also praying that he becomes the next President of Nigeria.

“Tinubu is eminently qualified for the presidential position, the record he created as the governor of Lagos hasn’t been matched by anyone.

“Tinubu has worked so hard for the APC, he is not new to global politics and will certainly apply his extensive networks to project Nigeria’s image as well as boost the economy of this nation,’ they said.

While responding to the Monarchs, the Director General, Tinubu Support Group, Arch. Umar Ibrahim said, “we have identified Asiwaju Bola Ahmed Tinubu as a patriot in words, in action, and indeed, a leading light among the people. He is a detribalised Nigerian with a national outlook, an accomplished politician and a seasoned administrator.”

He further appreciated the monarchs for showing their support as he promised to convey every of their messages to their principal, Alhaji Ahmed Bola Tinubu.