Home News Ejeh Ankpa IV: Unveiling the ‘Bridge Builder’ in a Time of Suspense and Mementos 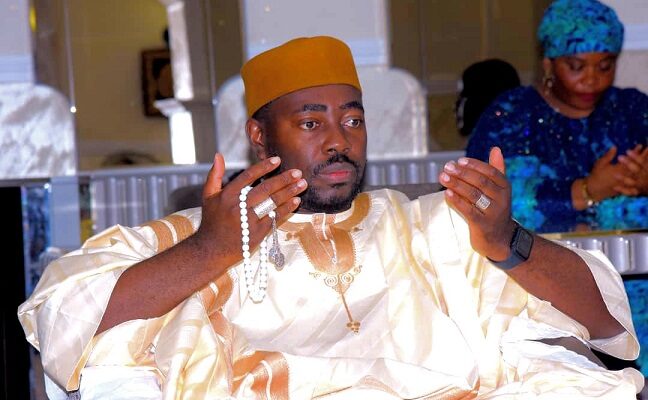 Ejeh Ankpa IV: Unveiling the ‘Bridge Builder’ in a Time of Suspense and Mementos

Thursday, 21st October, 2021, is a day that will never be forgotten in the archives of Igala history as a people and Ankpa, as a place. That was the day the Kogi State Government, through the Honorable Commissioner for Local Government and Chieftaincy Affairs, approved the appointment of Alhaji Abubakar Sadiq Ahmed Yakubu as the fourth Ejeh Ankpa Designate after five years of uncertainty due to an inexplicable silence that heralded his late father from being succeeded.

The Ejeh of Ankpa ruling house are direct descendants of Abutu Ejeh and the title Ejeh, was informed by the fact that it was the name of the founding ancestor of the Igala ruling dynasty, HRM Abutu Ejeh.

The first Ejeh of Ankpa was officially presented with a Staff of Office in 1970 by Coln. David Bamgboye, the Military Administrator of defunct Kwara State. Ankpa as at the time, comprises of all chiefdoms of the Atiyele which included Ankpa, Imane, Okpo, Ogugu, Ojoku and Enjema.

History has it that the first Ejeh was the district head and Onu of Ankpa together before the title(Ejeh) became a popular chieftaincy title to all first class Chiefs in Igala land during the administration of late Prince Abubakar Audu of blessed memory. The decision is said to was aimed at to decentralize and reduce the strength of the original Eje of Ankpa to strengthen the authority of Attah, the father and spiritual head of the Igala Nation.

Will HRH Alhaji Abubakar Sadiq Ahmed Yakubu’s reign be like his forefathers? This was the question on my mind as I read through the profile of the revered prince turned king. This thought even grew deeper as I joined a powerful entourage that  escorted him from Abuja during his historic home coming as the Ejeh Ankpa IV.

While paying homage to the Deputy Governor of Kogi State, His Excellency, Chief Edward David Onoja at his official residence in Lokoja, I saw the real caliber of people that made up the entourage of the new King who I already knew will be regarded as a “bridge builder” in no long time.

Other than his familiar family and the royal Yakubu Adaji Memorial Descendants Union —YAMDU, the fact that he is young and not home based, I couldn’t reconcile how the illustrious Kano-born Prince evolved into a great King and one of Igala, if not Kogi’s most influential introvert. So, anyone will understand my shock and surprise at the caliber of men and women who hard escorting him from Abuja.

“Prince Solo is a man of good heart, and he is a man of strong will,” says a former Director General of the National Space Research and Development Agency (NASRDA), Prof. Muhammed Onailo Ogah and his co discussant quickly corrected him, saying: “He is now King Solo o”, and I could see great delight on the Prof’s face. “I see him becoming a greater replica of his father. His father was a very good man and he did very well in very difficult situations,” the Prof added.

Of him, the Deputy Governor said in a response that: “It so happens that this time, there is an influx of great Kings in Kogi State and Kogi East in particular with top among them as the Attah Igala: God has done it that they are all coming without delude and that means there is a sign of synergy and abundance for Igala land. The Ejeh possesses all the aura of a great King. I congratulate you (Ejeh) and thank you for coming, there is a turning point and I appreciate you my King.”

My joy went full circle when I concluded — already imagining my official report in my head, as par a Media Aide on duty with my boss that the report headline will be “Rep. Halims Escorts Ejeh Ankpa Designate Home As Deputy Governor Visions New Igala land with a common sense of purpose and common destiny”. I further remembered his acceptance speech wherein he promised to bequeath a greater Ankpa to generation yet unborn. “A home that is neither Muslim nor Christian, rich nor poor, but [just one] dedicated to the common good of all.”

If Kingship was about elections, give me a candidate with such motivations and I would vote for him any day, any time.

History they say is a recollection of the past and the truth is, anyone who knows a vast array of historical events between previous Ejehs of Ankpa and Attahs, the memories are a sad conclusions instead of a past that would had been extraordinary and memorable. Since time immemorial, they in their separate rights, without ulterior motives, often have cold wars that are quite inexplicable.

Reading the insights of these previous Ejehs of Ankpa and Attah Igalas has shown me that the Ejeh Ankpa IV is a bridge builder that has come at a time the Igala ethnic nationality is in dire need of Socioeconomic development rather quests of who is who. It is sad that the tribe which boasts as one of the first ten foremost ethnic groups in a country of over two hundred and fifty ethnic nationality has nothing to show for it.

Some of the key areas of the United Nation’s Sustainable Development Goals(SDGs), such as Zero hunger, Clean Water and Sanitation, Affordable and Clean Energy,  Decent Work and Economic Growth, Industry, Innovation and Infrastructure which represents Goal 2,6,7,8,9 and 10, respectively, are more in out-of-thoughts than underway.

So when you travel across Igala land from Ankpa to Bagana, Ogugu to Odolu, Ajegwu to Ajaka, Onyedega to Idah and Ejule to Dekina, all you can see or hear as the effects of Igala illustrious sons and daughters are campaign billboards, chieftaincy titles, professional nomenclatures, ceremonial uniforms etc, which all serve as the backdrop of sorts to a parallel exhibition of exposure, rather than an evolution of communities from third world to at least, second world economy.

Therefore, having an Ejeh who has been evidently into community service such as academic study scholarships, job facilitation, health care developmental efforts, industrialization and even human welfare as observed in his assistance students, recommendations of Youths for employment in notable organizations, Frontline role in the Ahmed Yakubu Foundation(AYF) launch which ultimately targets provision of affordable health care, fellowship with the Kogi State Chamber of Commerce and Industry, occasional distribution of food items and many more even before he was named Ejeh Ankpa IV.

It is worthy of note that the young Ejeh’s act of an imperial homage to the Attah Igala, His Royal Majesty Attah Matthew Alaji Opaluwa in allegiance as widely circulated immediately after his home coming are pointers to the fact that a bridge builder who will surpass foundation of his forefathers in Ankpa to advance peace, unity and development in Igala land has emerged.

For us as a people, the best days are just here with us and we cannot thank God enough for the gift of such a visionary Ejeh, who is poised at building bridges at a time we almost got into suspense, due to a long gap of wait and mementos. All hail King Sadiq, Agaaaagwu!!!

– Muhammed Nasiru Adejoh is an opinion moulder and a public commentator. He can be reached on naadejohs@gmail.com or his Twitter handle @amnasiru