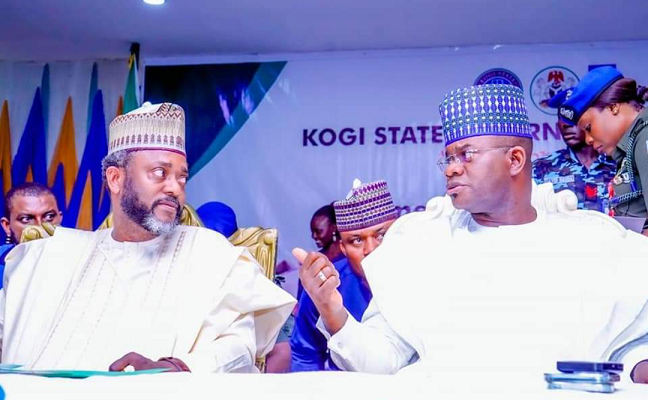 “My core team, especially the progressive youths of Kogi State led by my right-hand man, Edward Onoja. Their doggedness and forthrightness brought home to me in a very personal way that popular line “Though tribes and tongues might differ, in brotherhood we stand.” they are the apostles of this broad-minded change” – Governor Yahaya Bello, 2016.

“I thank my team in the New Direction Administration most especially His Excellency, Chief Edward Onoja, my Siamese twin and the deputy governor of Kogi State for the hard work and loyal followership which enabled me to pilot this ship with minimum distraction”. Edward Onoja is a Godly politician and an astute, visionary and talented strategist who has proved his worth again and again. First, as my Chief of Staff and now as my deputy” – Governor Yahaya Bello, 2019.

The above statements firmly reiterate how much of a reliable friend Chief Edward is. His Boss, Governor Yahaya Bello has never failed to appreciate Chief Edward Onoja at every given opportunity for the role he has played in the emergence of the New Direction Government and the price he has paid in sustaining the unity and progress of the  Government. it is safe to say that Chief Edward and Gov. Yahaya Bello share an uncommon spirit of brotherhood that transcends beyond politics.

Chief Edward David Onoja is today considered the most vibrant and celebrated Deputy Governor Kogi State had ever produced and it is made possible through the powers of God and that of His dependable Boss. Considering Chief Onoja as a vital part of Governor Yahaya Bello’s regime—it is of good course to note by emphasis how his political and humanitarian dues have been paid quietly and loyally and even in the going.

Chief Edward Onoja has over time built a reputation that revolves around genuine loyalty, respect for those above him and immense wisdom in discharging his duties as a loyal subordinate. today, Edward Onoja tops the order of politically admired and cherished personnel under the GYB-led administration as a result of his excellent delivery of assignments of many forms designed by his Boss.

His Godly and humble demonstration to both the young and the old, male or female irrespective of tribe and religion is key to the tremendous success of the new direction of government. I can vividly remember his magnanimity communicated through timely intervention when he heard of the whole story surrounding the Late Doctor Idowu’s death and the condition of his family.  I can attest to the numerous housing projects he has gifted to the widows and needy in the past and the facilitation of educational scholarships and federal appointments for hundreds of young and vibrant kogi state youths.

The Araga 1, as popularly known on the street, had countlessly rolled out developmental initiatives that have benefited the entire Kogi State in terms of supportive stands with his Principal, his productively wired approaches to issues concerning his Boss and the State is second to none as regards responsive and supportive approaches.

Looking back to 2016, when he was appointed Chief of Staff to the Executive Governor of Kogi State, he became unobtrusively the first Chief of Staff to a Governor from another zone, all these put together made him a revered figure under the mentorship and leadership of his Master because of his passionate, tremendously wired distinctions in both administrative and political discharge of competence.

Edward Onoja is baked with impenetrable attributes and characteristics. He is known for his resourceful stand with his master, He is birthed with super and sporty intelligence, leadership skills, integrity and honesty. As a loyal friend of the youngest and youth-friendly Governor, he has demonstrated royalty in loyalty and attracted the full attention of the Government, supports and infrastructural dividends to his community and senatorial district.

Chief Edward Onoja is a reputable personality whose grooming commenced from the banking sector to the oil and gas sector and fully equipped with managerial experience. as a trust sustainability power steerer, he is today in Kogi State remembered always as a result-oriented leader, strategist, problem solver, creative thinker and friend of the youths and all sundry.  His exposure, intelligence, political experience and leadership qualities are second to none and purely unquestionable. Edward has blasted through every “obstacle-sphere”, leaving awe and daze in his wake. Justifying the point that best suit his leadership style and unflinching loyalty to his Principal as duly observed.

About this man, I think his best is yet to come. In line with his express directive. I say fingers crossed with Eagle focus.