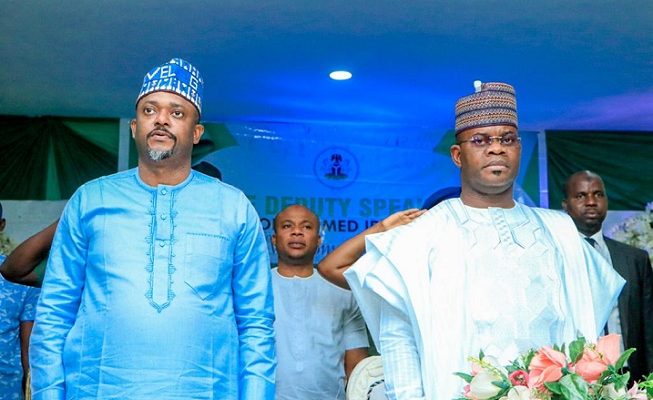 This assertion from the Holy Bible best describes the duo of Kogi State Governor, Alhaji Yahaya Bello and his Deputy, Chief Edward Onoja, who have enjoyed and still enjoys robust relationships, spanning over two decades and still counting.

It has been a great deal of exemplary loyalty being demonstrated in their togetherness that has kept a lot of admirers and enemies spellbound, making people wonder what could have been the source of such bond and unity.

This awesome relationship between them has engendered a deep-rooted sense of focus and commitment to their exceptional services to the people of kogi State.

The developmental strides of the current administration in Kogi State can be said to be the by product of loyal leaders enjoying the same sense of focus and commitment to the good of their state.

Governor Yahaya Bello’s leadership style is well known for the promotion of loyalty coupled with hard work, and these two virtues are the same qualities that endeared the Governor to his deputy and cumulatively earned him, Onoja, the position of the Deputy Governor.

The Governor, working with the uniqueness of purpose and harmony with his deputy has resulted in the world-class rapid growth and development of Kogi State being witnessed today.

As of today, the wonderful level of infrastructural and human capital development in the state have never been experienced before now.

According to the Governor, the year 2022 still offers ample opportunity for his Administration to do more priority projects and programs in furtherance of his development agenda for the state.

Flowing in the rhythms of cordiality and generous relationship with his boss Chief Edward Onoja has been unequivocally committed to the aspirations of his boss, he has consistently demonstrated not just his support but he has given his whole being in Championing the course of the Governor’s aspiration.

Chief Onoja is highly preoccupied with the vision and mission of Actualising the clarion calls for his boss to contest for the highest office in Nigeria.

In his reaction to the recent display of campaign posters of him seeking to become the governor of Kogi State, Chief Onoja described those behind the posters as mischief-makers on a pulldown mission while reiterating his stands thus, “I have said it times without numbers; ONLY THE BIG TROPHY IS THE FOCUS. And just like I have said before, the Lord who enthroned will do it for us.

“I urged Kogites and Nigerians to ignore any form of posters either online or physically anywhere. My message remains consistent and it’s been there from when God through the trust and Love of my boss elevated me to my present office”.

Clearly, Chief Onoja has been of immense support during their first and second tenure election into office as Governor of Kogi State, and he is still all out to continue to strive for the realization of the set goal.

Therefore those who are involved in the attempt of creating disunity and disharmony between Governor Bello and Chief Onoja should desist from such and join hands together with them towards ensuring the desired electoral victory for our dear governor as President Federal Republic of Nigeria come 2023.