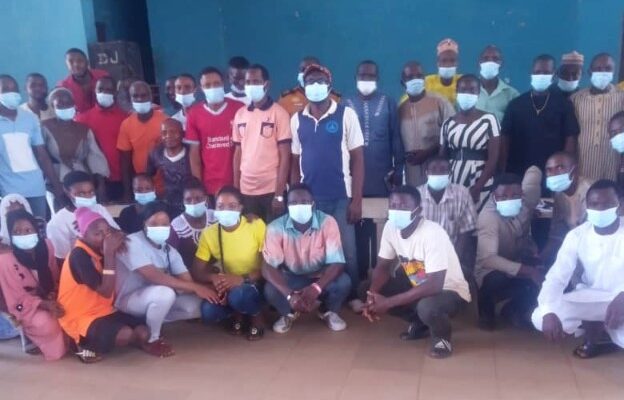 Dangers of Drug Abuse: PARE Embarks on Aggressive Sensitization of Youths in Kogi

A Non-governmental Organisation, Pastoral Resolve (PARE), has embarked on aggressive sensitization of Youths in the Eastern Senatorial District of Kogi state on Dangers of drug abuse to complement government’s efforts in peace building across the country.

Aside drug abuse, PARE is also educating the future leaders on the need to make impact in conflict resolution as well as joining hands in the fight against the rising insecurity, and other social vices ravaging the nation.

Mr. Israel Okpe, Senior Programme Officer under the community initiatives to promote peace (CIPP) while speaking during the awareness campaign on the “Dangers of Drug Abuse” organised for selected youths in Dekina Local Government Area of Kogi state, said that the campaign will equip participants with necessary rudiments to see the dangers of drug abuse and its negative effects to enable them avoid falling into the pitch

He also called on the youths in the area to strive to tackle crisis within their communities through amicable resolution.

He described conflicts, insecurity, drug abuse and other social vices across the country as worrisome and alarming saying that all hands must be on deck to tackle the menace as government alone cannot do it.

Mr. Israel Okpe also described the sensitization Programme which was held at Government Secondary School, Dekina on Wednesday, as timely and the only way to inculcate the attitude of peace promotion amongst the youths and their immediate communities.

According to The Senior Programme Officer” the project is funded by USAID with other partners like Savannah Center for Diplomacy, Mercy Corps and Africa Radio and Drama Association (ARDA), with the aim of achieving global peace

“In an effort to achieve the desired conflict resolution you must have best approach to human development, respect the tradition and customs of the people, draw people closer through persuasion for adequate sensitization

“There is also the need to evolve conflict sensitivity approach. Don’t do anything that could be harmful to people and their immediate society. You must present yourself as an advocate of peace building and not as a divider”

The Officer-in-charge Nigeria Security and Civil Defence Corps in Dekina Local Government Area, SP Azodo Christian who spoke with our correspondent shortly after the enlightenment campaign, expressed the readiness of his security agency to Key into the the fight against drug abuse as a result of its unhealthy effect on the people.

“We are trying our best to reduce drug abuse to its barest minimum within Dekina. The rate at which people indulge in drug abuse is alarming and if not urgently checked could lead the nation to a doom”

Mrs. Idaikwo Rabi, one of the participants from Agbenema Community who also spoke to our correspondent described the sensitization campaign as wothy and beneficial to the people of Dekina and other neighbouring communities.

Spread the love
Tweet
Previous PostPrayers for Nigeria's Unity, Russia-Ukraine Impasse Should be Lenten Focus - Gabriel Onoja Next PostDr. Abdullahi Ozomata: To Whom God Will He Gives Power