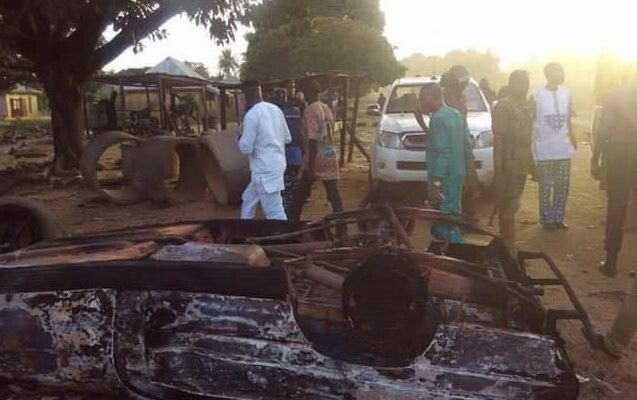 Sequel to the crisis in Bassa local government area Kogi state, the Bassa Kwomu people have exposed their dubious and primordial desire to kill when they did not stop at telling lies against the Egbura people, but also telling lies against Governor Yahaya Bello and the security agencies. We will belie their false stories so that the public will not be misled and misguided. Yes, the information regarding the violence in Bassa LGA must be put in its right perspective asap!

The Bassa Kwomu people’s false and dubious claims include but not limited to the followings:

a. that it is the Egbura people who have been attacking them.

b. that Governor Bello is backing the Egbura people.

c. that the security personnel in the area have been aiding the Egbura people.

However, all these allegations are nothing but misrepresentation of the truth and mischaracterisation of the crisis.

I will look at their false claims one by one.

For the Bassa Kwomu people to claim that it is the Egbura people who have been attacking them is a shameless attempt to upturn the facts of the matter.

The Egbura communities have been invaded by Bassa Kwomu militias times without number. We know that a critical, holistic and comprehensive assessment will be objective here. The Bassa Kwomu people know the truth of the matter, but only trying to make the truth standing on its head.They are the attackers, the assailants, the invaders and the killers.

Attacks on Egburas, Dates and Places by Bassa Kwomu Militants.

Attacks directed at the Egbura people and their communities by Bassa Kwomu militants are too many to recount. But I will mention just a few, with references to dates and places for the purpose of credibility and accuracy.

In 2016, the Bassa Kwomu warlords launched a murderous and arson attack on the Egbura people at Kpanche village which forced the latter to flee their abodes and seek sanctuary on ‘strange’ land.

On 21st April, 2018, the Bassa Kwomu militants again launched a premeditated and well- coordinated attacks on almost all the Egbura communities in Bassa LGA of Kogi State. This led to the demise of some Egbura people. Egbura houses burnt and property worth of millions of naira were stolen while others destroyed.

In the same 2018, an Egbura man named mallam Abubakar of Mozum was attacked and beheaded on his way home from fishing expedition by the Bassa Kwomu militants.

On Thursday, 11th September, 2021, an Egbura man in Biroko community named Abdurahman Shaibu was shot on his way home from farm by Bassa Kwomu militants!

On 23rd May, 2022, they again attacked Egbura people in Biroko community where Hamza Ele Nuwa and Basiru Suleiman were shot.

On Thursday, 2nd June, 2022, an Egbura woman by name, Nnadama Abah was gruesomely and mercilessly murdered.

Yet, on Thursday, 9th June, 2022, the Egbura people in Mozum came under heavy attacks by Bassa Kwomu militants, killing people and burning houses plus part of Ohiogba, the king of Mozum palace burnt.

Alas! With all these attacks, even the worm will turn!

On their torrential lies that Governor Bello is supporting the Egburas.

The truth must be told that if any thing, it is them whom the Governor has favoured. The Bassa Kwomu militants have defiled the Governor’s order stopping attacks, yet he, the governor, never punished them for violation of his order. We allow the public to decide whether it is normal for the Governor’s order to be flouted many time without punitive measure.

Display of Impunity by Bassa Kwomu.

Impunity breeds lawlessness, carelessness and criminality! Bassa Kwomu people have manifested  impunity with reckless abandon. A few examples will suffice. Contrary to the Government’s order, they have attacked Egbura people as many as mentioned above without punishment.

Contrary to the laws, the Bassa Kwomu people have usurped the farmland, the fishing ponds residential houses etc of the Egbura people, yet with impunity.

The Arrest of Egbura People: Punishing The Victims!

Against the background that the Egbura people are the ones being serially attacked, it is unfair to blame the same victims and arresting the victims. It stands in sharp contrast to the law of natural justice.

It has been proved beyond any modicum, iota and scintilla of doubt that Bassa Kwomu militants have killed, maimed, displaced and impoverished the innocent Egbura people. We therefore, urge the government and general public to dismiss the Bassa Kwomu claims as shedding of crocodile tears and an attempt to win the cheap and undeserved sympathies of the government and general public. It is all jiggery – pokeries and charades  being used to drag our pristine white robes in their barrel of palm oil!

– Yahaya A. Maihankuri,
A strong proponent of peace!