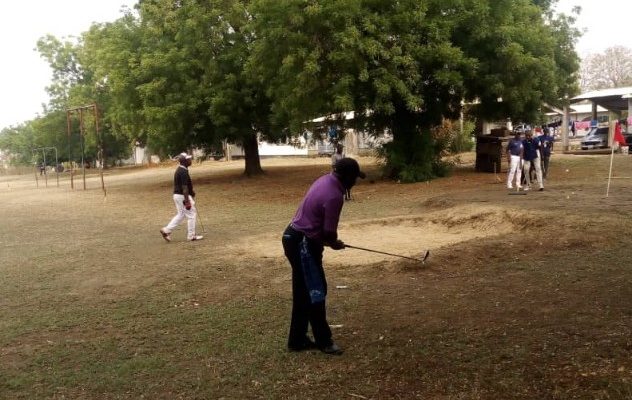 The CAR in collaboration with members of the Mini-golf club, organised a sent forth event in honour of Maj. Gen. Soleye, the founder and initiator of the club, as he retired from Nigerian Army after a meritorious 35 years of service to his mother land.

Speaking to journalists at the sent-forth program, Soleye noted that the idea of creating a golf course started when he newly reported in Lokoja as CAR Commander, because of the nature of the barracks’ environment particularly during the raining season.

According to him, it occurs to us that we have some natural obstacles here, and creating a 5-hole golf course was the idea.

”But due to the pressure from some friends and colleagues we decided to make it a 9-hole mini golf course, no matter how small, and that was why we named it a Mini-Golf Club.

”Though it is a very challenging course due to the trees and the various obstacles at the course but you would enjoy it better during the raining season.

”So we felt we should not allow a barren land that is good for golf to just waste away like that, and to also encourage the game of golf within and outside the barracks for young and the old people”, he said.

He stressed that golf was not just meant for the high class or the old, but for every one of any class, statue and gender, noting that since the inception of the golf course, friends from within and outside the barracks had been coming to play and registering with the club.

The former CAR Commander noted that the initial members was about seven but have now grown to over 20 members.

Gen. Soleye expressed his gratitude to the Almighty God and the Nigerian Army for the opportunities and guidance to attain professional rank of Maj. Gen in the Army.

He stressed that the essence of heading a place was to add value to the existing developmental drive, hence the reason for the facelift in the barracks in terms of the perimeter fencing, and creation of the CAR Mini-Golf course for recreational engagement of the Army and to have more golfers in the state.

He added: ”I never expected the sent-forth party since I had already handed over, but the CAR and the golf club felt since I was the founder and initiator of the club they deem it fit to host me in appreciation for the job well done”.

He, however assured that his successor, Maj. Gen. Gbolahan Oyefesobi, is a seasoned senior officer with vast experience and exposure, saying they had known each other for over 36 years.

He stressed that the new CAR Commander had always shown high level of competence anywhere he found himself.

Also speaking at the event, the Captain of the CAR Mini golf club, Lokoja, Mr. Paul Kouame described the out-gone Commander as highly intelligent and knowledgeable individual who had impacted so much on the lives of those he had worked with.

He commended the retired commander for creating the mini golf club, saying it would help to improve the health benefit of golfers.

According to Kouame, golf is one of those few games that one can play till the age of 120 years.

On sustainability and maintenance of the golf course, Kouame said that golf club were members expected to pay for registration and annual subscription, which would serve as revenue to be used for proper maintenance.