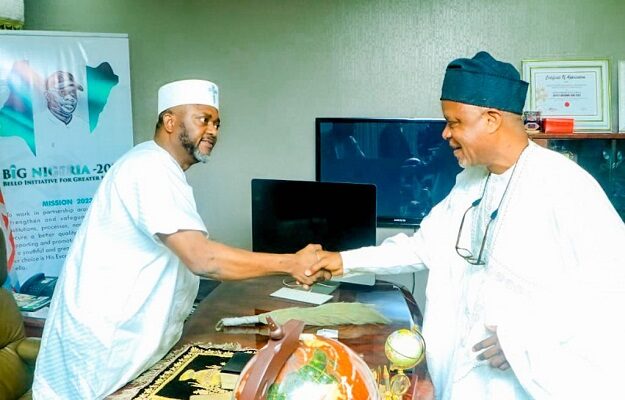 The All Progressives Congress (APC) National Media Team of FGN/UBEC Project Inspection, has commended Gov. Yahaya Bello of Kogi for his unprecedented achievements in basic education infrastructural development across the 21 local governments areas of the state.

The Team Lead, Dr. Tom Ohikere, gave the commendation when he led the team on courtesy visit to the office of  Kogi Deputy Governor, Mr Edward Onoja, on Friday in Lokoja.

Ohikere, who is also the Publisher of APC News Online, and former Kogi Commissioner for Information, said the team was on a fact-finding mission to ascertain the level of progress in the area of infrastructural investment in basic education in the various APC-Controlled States.

He said the aim of the visit was to inspect FGN/UBE projects in the state, to authenticate the claims of UBEC and SUBEB on Project execution.

He added that the inspection would help to publicise the relentless efforts of the APC-led administration in making quality education available and affordable for every child  across the country through universal basic education programme.

He, therefore commended Bello for sustaining basic education in Kogi, describing his achievements in the execution of FGN/UBEC infrastructural projects in the state as ‘unprecedented’.

Ohikere further eulogised the governor for massive and construction and reconstruction of infrastructures, and the quality and quantity of the job done across the state.

He stressed that the state was on a beautiful track of repositioning universal basic education for all natives and residents, and expressed satisfaction that all Federal Government direct intervention project in Kogi had attained 100 per cent completion.

He, however urged the State Government to provide land to the Federal Government for the construction of Model Smart School comprising pre-primary, primary, junior secondary and an Ultra model ICT complex.

He noted that the project after completion, would be handed over to the State Government with UBEC providing the necessary support to sustain the prescribed standard in modern status.

In his response, the deputy governor, restated the determination of the governor to develop and make Kogi, a hub for thriving investment, businesses and  guaranteeing  sustainable future for the citizenry.

Onoja stressed that nothing could be built into a secured future without the provision of sustainable education.

He reassured that the state under the leadership of Gov. Yahaya Bello, was not only making successes in education sector, but had also made the State a no go area for bandits, kidnappers, terrorists, and other criminal elements.

According to him, the  great efforts of the governor which is  hinged on focus and determination to improve the quality of learning and teaching at the basic education level  had made Kogi most secured in the country, thus laying the foundation for other development to thrive.

Onoja explained that the present administration having considered the importance of education to sustainable development, necessitated making it to occupy the top place in the administration’s thematic areas followed by health.

The deputy governor reiterated the assurance of the governor to increase budgetary allocation to the education sector to over 25 per cent in the 2022 budget.

He assured the provision of vast land in the three senatorial districts of the state for the establishment of Model Smart Schools, as well as the provision of furniture and quality teaching aides in identified schools observed during the monitoring.

Also speaking, the Kogi Commissioner for Education, Science and Technology, Mr Wemi Jones, said the Governor remained committed to the development and advancement of education across all facets in the state.

He added that the governor had given the ministry a marching other to immediately commence the process of recruiting and retraining the best teachers, saying, ”the ministry is already working towards ensuring we attract capable hands to come and take us to the next level.

“If you put the best of structures, equipment and facilities without the human resources that will put those things to use and impact knowledge, it is just a mere waste of time, and you cannot get the best results.

“The governor quite appreciate human resources, and before the end of this year the first set of qualified professional teachers would be recruited which will be in phases, because the need assessment has been done.”

He added that the state could now boast of Computer Science Laboratories, water facilities, sporting arenas, among others, in public basic schools across the state.

The highlights of the visit was the presentation of a Letter of Attestation to the governor by the team, for his tremendous efforts and achievements in sustaining Universal Basic Education in the State.

The APC National media team had been in Kogi since on Wednesday, monitoring the FGN/UBEC projects executed across the state.

The local government visited include: Lokoja, Kabba/Bunu, Okene, and Adavi Local Governments Areas, among others.