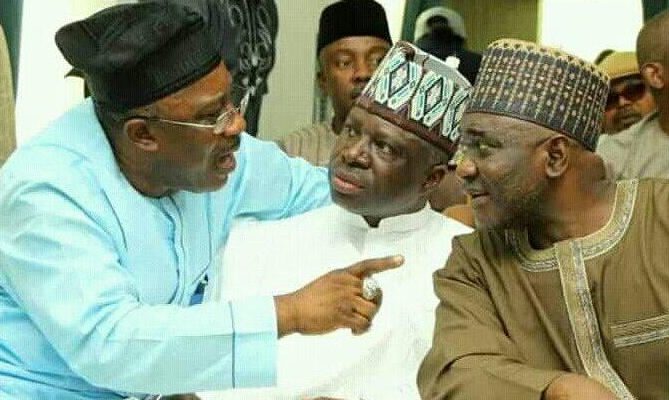 Senators Smart Adeyemi of Kogi West, Jibrin Isah Echocho of Kogi East and Yakubu Oseni of Kogi Central have decided to join the ongoing macabre dance in the state by dancing naked before the Nigeria public on issue of 20 billion bailout fraud allegation that involved the state, not federal government.

Kogi is always novel when it comes to bad politics. This is the first time that senators from any state in Nigeria will confront Economic and Financial Crimes Commission (EFCC) over a state government slush funds meant for payment of salaries and welfare of its citizens.

Coincidentally, these senators have been dragged to EFCC in their previous assignments, at private, state and federal levels.

This is a strong conviction that the ghost of 2019 Kogi elections will continue to haunt the three senators now and for a long time to come, as their actions showed they are mere political stooges to Kogi Governor, Yahaya Bello.

It is no longer news how the general elections and bye election that brought these three senators was massively rigged to secure pyrrhic victory for them. The latter one of Kogi West was complete day light political robbery.

Senators who are monthly on refund to state government for election funding in 2019, who lack political will to appoint even their aides, cannot be expected to stand tall to fight for the welfare of the people.

No wonder, the Almighty Kogi East Senator openly stated that his political loyalty is to no any other person, except Kogi Governor, Alhaji Yahaya Bello and his Deputy, Edward Onoja.

For Kogi West, it has been same story. The current gate crasher is only there to enrich himself and family, only to throw crumbs to some low prestige individuals from Kogi West.

This period is more or less like a military coup for the people of Kogi West, where the military rule with fiat and command.

The worst is happening in Kogi Central, the home of the Governor, as the occupant, Senator Oseni never dreamt of becoming a state lawmaker, talk less of a Senator of federal republic of Nigeria.

With their disposition, I don’t know how they wish to intervene or how their intervention will bring pipe borne water, electricity, clinics and hospitals as well as a conducive education to the people of their respective senatorial districts.

After two years, the senators are still struggling and promising boreholes, empowerment, conducive learning environment and capacity building program to their constituents.

The representation of the three senators falls short of expectations, even with the ranking advantage of Kogi West senator. So far, his major engagements are mere duplication of programs and needless activities.

Two years after, the performance of Kogi East and Central Senators is ranked below average, both in constituency projects and legislative functions.

No wonder they had every opportunity to visit the anti graft agency, EFCC, to lobby for Bello’s exoneration and innocence.

The next port of call will be the ICPC so as to preempt any attempt to open the many can of worms in Kogi state before it is too late.

I hope the APC members of the House of Representatives from Kogi state will not join this ugly show of shame displayed by Kogi Senators, to the embarrassment of the red chamber of the National Assembly.

It is high time the red chamber probe the visit of Kogi Senators to EFCC as they have showed glaring needless influence on the EFCC to teleguide the outcome of the investigation.

This is an allegation that the state government already denied of having anything to do with either Sterling Bank or the 20 Billion being investigated by the EFCC. Why then are Senators from Kogi state pre-empting the outcome?

This journey to EFCC is shameless and political suicide that will not be forgiven or forgotten now or in the nearest future by the people of Kogi state.