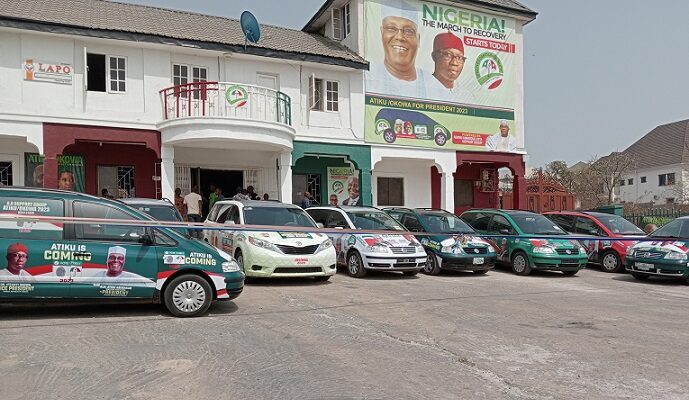 Awoniyi, a former Deputy Governor of Kogi state, thanked the promoter of AMASG, Alhaji Adamu Mahmoud Atta, for his concern and commitment to PDP, promising to utilise the vehicles for  seamless electioneering campaigns.

He charged Kogi electorate to vote PDP to reset the nation.

Awoniyi called on the people of the state to collect their permanent voters card (PVC) as it is the only weapon required to exercise their franchise.

In his address, the Director General of the support group, Chief Sam Ranti Abenemi, promised to deliver a minimum of six hundred thousand votes for the party’s presidential candidate, Alhaji Atiku Abubakar and his running mate, Governor Ifeanyi Okowa.

Speaking at the campaign office of AMASG, Abenemi said the support group has expanded its tentacles across the three senatorial districts of the state, stressing that all the needed structures to deliver her candidates have been put in place.

Abenemi disclosed that the AMASG is different from other support group as it has not limited its operations to media propaganda, but active mobilisation of the grassroots.

“This Group, powered by Alhaji Adamu Mahmoud Atta, has her campaign head office in Lokoja. We have zonal offices in the 3 senatorial districts and other offices in each of the 21 Local Government Areas of Kogi.

“We are not joking, we mean business. We simply decided to be quiet and do our work so that the results will speak for itself. Our aim is to ensure we secure 600,000 votes for the Atiku/Okowa in Kogi, we are ready, all the needed structures to achieve this have been put in place.

“Come 25th through 26th February 2023, Nigerians will be celebrating Atiku/Okowa as her President and Vice President by God’s grace,” he said.

While inaugurating the Coordinators in Lokoja on Thursday, Abenemi charged them to redouble their efforts to guarantee landslide victory for the party.

He added that the aim of the group is to mobilise voters from the polling units, wards and local government, saying they are expected to remain in their localities to harvest voters for the PDP.